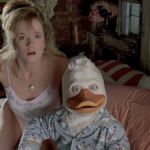 Though many might only remember “Howard the Duck” as an infamous bomb from producer George Lucas, let’s not forget, it was also a Marvel movie — the first major one, in fact, since a Captain America serial in the 1940s. It starred “Back to the Future” legend Lea Thompson, and she’s still very much ready to do another one, this time as a director.

Appearing on “The Tonight Show” on Tuesday night as part of the show’s 80s-themed night, Thompson noted that “I’m actually the first Marvel queen” and revealed that she’s actually “been in” to Marvel to pitch another “Howard the Duck”movie.

“I’ve been in to pitch a ‘Howard the Duck’ movie with Chip Zdarsky, who did the comic book, the last run of the Howard the Duck comic book,” Thompson said. “He put me on the cover, and so we went in, and we pitched it.”

Though Thompson didn’t say how long ago they’d been in to pitch it, she did mention in a 2018 interview that it was on her calendar. Last July, she resurfaced her hopes to direct it, when Howard showed up in Marvel’s animated series “What If…?” (voiced by Seth Green). It’s been a long-held wish for the actress.

Fallon then pointed out that Thompson has plenty of experience directing now, especially in the sci-fi and fantasy genres as of late. Thompson has directed episodes of SYFY’s “Resident Alien,” The CW’s “Stargirl” and more.

“Yeah, I’ve been trying to learn all my special effects, just in case Marvel calls,” Thompson joked. “You need some more women directors!”

You can watch the full interview in the video above.