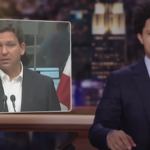 Florida Governor Ron DeSantis claimed Tuesday that “national regime media” wanted Hurricane Ian to hit Tampa to “pursue their political agenda” without regard for the people impacted by the storm.

“Quite frankly, you have national regime media that they wanted to see Tampa, because they thought that it would be worse for Florida,” the governor told conservative outlet Florida’s Voice in a video interview after a Cape Coral press conference. “They don’t care about the lives here. If they can use it to pursue their political agenda, they will do it.”

The governor’s comments followed a targeted question from the news organization’s editor-in-chief Brendon Leslie, who asked DeSantis if there would be “accountability in the media” for predictions that inaccurately predicted Tampa would be hit hard by the storm.

In response, the Republican politician noted that the media’s perspective represents a different way of thinking that lacks regard for the well-being of the people in the endangered communities.

DeSantis also clarified that “we were obviously concerned about Tampa, too” and noted that the predictions “absolutely impacted” decisions for Tampa residents to seek shelter elsewhere.

As Southwest Florida recovers from Hurricane Ian, the governor told people in the area to “hang in there.” “The resilience is phenomenal,” he said. “I honestly think that we’re going to bounce back much quicker than anybody is predicting.”

“We’re here for the long haul for you, and we’ll make sure we’re doing everything we can, whatever tools are at our disposal to help bring about a swift and successful recovery,” DeSantis concluded.

Watch the video interview between DeSantis and Florida’s Voice above. 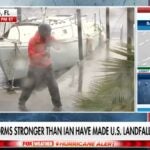