Will there be ‘The Return of the Witches 3’? the cast has spoken 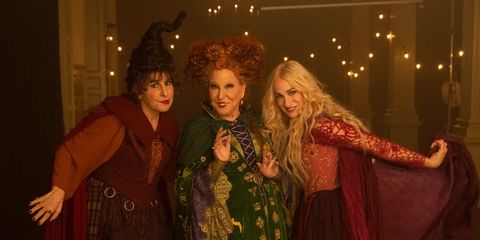 SEE ‘THE RETURN OF THE WITCHES 2’

If you haven’t seen ‘The Return of the Witches 2’ yet, we warn you that you will find spoilers next!

Just a few days have passed since the premiere of the long-awaited Disney+ sequel, and fans are already eager to find out if the Sanderson sisters will return to their screens. Almost 30 years after the premiere from the original film, in 1993, Bette Midler, Sarah Jessica Parker and Kathy Najimy reunited to reprise their roles as the three sister witches.

Despite the end of the movie seems to have left things very closed for the trio, a small detail in the post-credits scene changes the picture. After Becca managed to defeat the Sandersons, and send them to the afterlife (tricks and potions involved), we observe her enjoying her new powers with her new coven.

After the credits, we move inside the old magic shop, and see a box with the inscription: “LN Candle #2“. That is, if another black flame candle exists, it will also there is a possibility that the Sanderson sisters will be summoned again.

Disney has not yet confirmed if there will be this second sequel or not. Nevertheless, there’s a good chance fans can get what they want. The recent premiere has garnered great success, ranking #1 in Disney+ releases to date. Added to this, the leading actresses have expressed interest in reprising their roles.

During the film’s New York premiere, Parker stated that he would sign on to a third film if Bette Midler was in it. “Bette is already starting some rumors,” the actress commented to Extra. “I get hooked wherever I go. No one says no to Divine Miss M.”

For his part, Najimy declared to People that she is a defender of the mantra “never say Never“. And he continued: “It’s been fun. It’s a lot, but who knows? Who would have imagined 30 years ago that we would make this sequel?” joked the actress. “I think if we did it in another 30 years, well, there would be some cane and some walker involved. Broom flights will have to be close to the ground.“

About the plot that the third witch movie would follow, fans have theories about the new character introduced in the sequel: the witch mother She gave the spell book to the Sanderson sisters, and then turned into a bird. At the end of the film, a bird with the same characteristics can be seen hovering around Becca. Will she be the new villain of this story? Will Becca need to resort to the help of the Sanderson sisters to fight her?

The answers are not clear. We will have to be attentive in case Disney pronounces on the matter.

SEE ‘THE RETURN OF THE WITCHES 2’