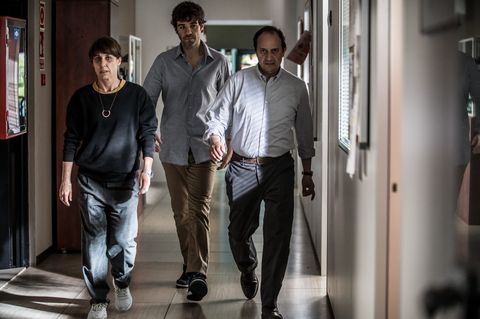 We know that zombie and undead series and disaster movies offer a hotbed of situations where human nature can be tested, under stress, to see where it would burst. The free field entropy and all Apocalypse serves as a balance to determine what great virtues/defects move us as a species and why our survival instinct is at the same time the worst disaster we can encounter.

‘Blackout’, an anthological collection that Rodrigo Sorogoyen, Raul Arevalo, Isa Campo, Alberto Rodriguez and Isaki Lacuesta have directed for Movistar Plus +, it is not saved from becoming a test field about the human condition. Fortunately, the team of writers who referee its five chapters they elevate and twist the narrative deftly enough that it (not always) falls into the obvious. We praise, for example, 1×04: a chase through the snow where the motifs of hunters and hunted fall with an inevitable silence.

We also admire the “zero kilometer” effect: the first chapter makes it very clear that the heroes of the series have tortilla skewers and coffee with milk for lunch and that in Spain the governments can already mobilize, but that ineffectiveness and collegiality end up prevailing even in the face of the End of the World. ‘Blackout’, in short, is a collection that wants to write about how we are here and now. In short, it is a series to better understand the present and one of the best original series of Movistar Plus +.

But what have we learned from it? Could we spend it in an Ethics class? Five moral conclusions follow that we reached after seeing the five chapters in Movistar Plus +.

Blackout 1×01: The hero is also an agent of chaos

Louis Callejo gives life to Ernesto, an advisor in the Directorate of Emergencies and Civil Protection. A man of action, someone prepared. Ernesto does not hesitate for a second to commit himself to his superiors when he detects the slightest sign of danger, he becomes an impenetrable ally (for us, who know that the great electrical failure is going to happen yes or yes), in the face of ineffectiveness and fear of some of his companions. Therefore, input and despite your sullen ways, we will take your decisions for good. The action man they make the right decisions to restore order (and how conservative is that, right?).

However, when Ernesto leaves the Emergency Department to go in search of his father, the archetype of the man of action is called into question, at least for a few moments. The guy finds himself stuck in an insurmountable traffic jam, one of those that in zombie movies bring death with them and that, in real life, can keep us for hours contemplating the same piece of sky and hoods. It is a peaceful scenario, while frustrating for its own narrative (Imagine knowing that the world is ending and not being able to move). So, act as you know best: taking the initiative. He swerves, drives like a madman in the opposite direction and almost causes an accident… He himself will realize, contemplating the chaos that he will leave behind him, that perhaps the jam did not necessarily end in entropy and destructionbut it is thanks to people like him that maybe he does.

Blackout 1×02: Altruism can be selfish

we all know that person who gives himself body and soul to a foreign cause to satisfy his own needs (of validation, in general). We won’t get into the quagmire of discussing his reasons, but the case suits us well to discuss the line that episode 2 of ‘Blackout’, directed by Raul Arevalowith script of Alberto Marini, Fran Araujo and of Arevalo himself. The chapter follows the director of a hospital guarded by the army but completely overwhelmed in times of shortage of medicines and medical personnel. There it has been decided to limit the age of medical attention to seventy years and, if the situation continues or worsens, the triage will lower patients up to sixty. This, of course, results in a grave injustice for older peoplewho most need medical attention.

If all the stories about the End of the World taught us something, it is that it is always preferable to die maintaining dignity than to be selfish to survive another day (it is impossible to count how many villains have died by their own weapons)… It is possible, and healthy , consider the moral grays after Eva’s decision (Ainhoa ​​Santamaria), the director, to leave out those who need it most to save the very foundations of the hospital. However, there is someone in the team who solves it by himself and begins to steal medicines to supply the nursing home that he has set up in secret at home, to take care of those who are left outside. A truly altruistic gesture, we might think. But it is?

Blackout 1×03: Worse than the end of the world is the age of the turkey

Beyond the obvious joke, if apocalyptic fiction has taught us anything, it is that life and death situations require a cold mind. However, in Showdown, isa field Y Fran Araujo they draw a hot protagonist, on the perpetual verge of boiling. She is Sofia (Zoe Arnao), must be about sixteen and lives with his mother (big, Patricia Lopez Arnaiz) in a flat in the city. The blackout there has had a visibility and sock-turning effect. Once the centers for minors have been closed, groups of homeless youth have begun to occupy the patios and gardens of residential blocks. Marginalized, faced with a social panorama of a horizontal blow that still does not welcome them, the gangs they begin to take property and power structures for what they are: completely random, dysfunctional and based on an unjust and outdated system. It is time for a revolution.

However, under the process of change, anger bubbles up, an anger with which Sofía connects at the moment. Episode 3 navigates between the shores of liberation and lack of control, always playing on the edge of the limits. What transgressions does the civilized, normative world tolerate, and what does it not. When the adult world finds itself in the grip of rage, and what are the consequences of it. What balance will have to be found after the complex balance of violence of the law of the strongest. Isa Campo and Fran Araújo spell out all these conflicts with didactic clarity. How we solve them, that’s left at home (for now, we recommend this handful of series to make you feel like a teenager again).

If something has Cortelazor (Jesus Chariot), the goatherd who stars in the fourth episode of ‘Blackout’, is instinct. The chapter also moves guided by a very fine sense of smell, naturally avoiding the common places of the lone wolf drama and the survival thriller in the countryside. Without ever being obvious, the chapter of Alberto Rodriguez (with script of Rafael Cobos) weaves together a dense network of pacts of trust that are woven with difficulty and are destroyed in an instant. After all, when your life is at stake, “playing it” is the most dangerous of options… In a chapter, yes, that is played and ends up working like a shot.

The story of the fleeing goatherd, threatened by a group of urbanites, can be approached thematically by unraveling two of its great entanglements, which are interrelated. Accompanying a highly prejudiced character to a city that has always objectified and marginalized him, the chapter puts the moral balance on the issue of care: whether or not they have resources, defend themselves or not, those who know how to care for the people or animals in their immediate surroundings deserve our empathy. The goatherd insists on the absolute unconcern of the city for the countryside, and adds: “They always want more.” When caring is out of reach, all that remains is to reach out and make ours what does not belong to us. Is the fourth chapter of ‘Blackout’ a camouflaged lesson on the three Rs of recycling?

Blackout 1×05: The delicate right to complain

Perhaps it is not the Great Theme of the fifth and last episode, the outcome of the pilot’s narrative jerks… However, there is a dilemma that Isa Campo and Fran Araújo leave unresolved in the air, and that can mobilize more than one interesting debate at the end of the series. Maria (Maria Vazquez) was alerted by her husband, the adviser of the Emergency Directorate of the first chapter, to go to the family’s second residence, in the countryside. There, she allies herself with the farm’s group of olive pickers, with whom she establishes a new type of commune, a beautiful and very rare one in the history of dystopian series.

During an evening around the fire, three day laborers explain their vital odyssey to reach Spain. The stories are austere but terrible, almost unimaginable beyond the objectivist and impersonal images of a telenews. Maria puts her head in her hands. When she asks what’s wrong with her, she retorts that she has “no right to complain”… To which they answer that yes, it does. Here’s a question for the other side of the screen: do you have it? What does it mean to complain when everyone is wrong? In the absence of a definitive answer, I invite you to give it a couple of turns. Of course, without falling into unproductive catastrophisms, that from this series “we will come out better”.

See also  FATWS: 10 Things You Didn't Know About Madame Hydra (In The Comics)