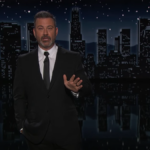 Thursday’s episode of “The Late Show With Stephen Colbert” kicked off with a cold open joke about perpetually caught-in-obvious-lies US Senate candidate, Republican Herschel Walker.

This time the inspiration is the latest scandal — or rather, string of scandals — that began on Monday with the daily beast report that Walker, who says he opposes abortion, actually paid for the abortion of one of his ex-girlfriends. And, naturally, she provided proof.

Walker, who has been caught in a staggering number of brazen lies about himself and his personal life during the campaign, naturally denied everything and insisted he knew nothing about the woman in question. But then as The Daily Beast reported just 2 days later, it turns out this woman is actually also mother to one of his increasing number of secret children. And yes, she provided proof.

Anyway, one of the things Walker said during an interview with Sean Hannity this week after the first part of this scandal broke was, while denying everything, “that wasn’t me.” Which sure sounds a lot like the title of Reggae and R&B singer Shaggy’s 2000 classic, “It Wasn’t Me.”

If you remember the song, it’s a duet with singer RikRok, in which RikRok explains how he got caught cheating in the most obvious way possible. Then Shaggy gives him advice on how to get out of trouble: Just insist “it wasn’t me.”

Well, “The Late Show” changed the lyrics so that it pertains to Walker, and references not just this scandal, but also his other numerous falsehoods, and the various oily explanations and justifications he and his supporters have used. And of course it alluded to (perhaps wishful thinking) the possibility that Walker’s scandals would help his opponent, Democratic incumbent Raphael Warnock.

You can watch the whole clip above, but we’ll transcribe the parody lyrics below:

Lying all about my kids

It’s not my fault I misunderstood

Didn’t know what I did

Sometimes I make mistakes please don’t vote for Warnock instead

I really thought that I was actually in law enforcement

I thought my best friend was an Egg McMuffin

Who has a bunch of secret babies?

Who’ll win the senate in the mid-terms?