James Corden Has Been Banned from Balthazar 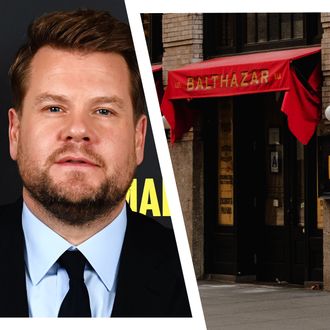 Traffic hazard James Corden likes his Carpool Karaoke and his omelettes very yolky. This is the mildest revelation in a highly damning, thoroughly entertaining screed by restaurateur Keith McNallywho Instagram-decreed on Monday, October 17 that the overly-excitable Late Late Show host has been banned from popular New York City French restaurant Balthazar. Long a staple of the scene, Balthazar is popular with celebrities and NPCs alike for its decadent, haute-Epcot vibes, onsite bakery, and reliable executions of French staples like escargot and steak frites. The restaurant serves around 1,500 people a day, and out of all of them, McNally calls Corden “the most abusive customer to my Balthazar servers since the restaurant opened 25 years ago.”

“James Corden is a Hugely gifted comedian, but a tiny Cretin of a man,” McNally writes. He says that he doesn’t “often 86 a customer,” but “today I 86’d Corden.” This is industry slang for proverbially picking someone up by the scruff of the neck and giving them a swift kick in the bum out the door onto the curb, à la Moe Szyslak. He then provides two recent examples of Corden acting cruel, demanding, and yelling at waitstaff.

In June of this year, Corden allegedly found a hair in something he was served and was “diabolical” about it to the manager (“After eating his main course,” as is so often the case). “Corden was extremely nasty to G, and said: ‘Get us another round of drinks this second. And also take care of all of our drinks so far. This way I [don’t] write any nasty reviews in yelp or anything like that.’” This incident makes Corden sound like all the naughty children in Charlie and the Chocolate Factory combined.

The second report of prissy, piss-poor behavior towards a server, referred to as MK, comes from October of this year, and it reads like a police statement:

Mr. Corden’s wife ordered an egg yolk omelette with Gruyere cheese and salad. A few minutes after they received the food, James called their server de ella, MK and told her there was a little bit of egg white mixed with the egg yolk. MK informed the floor manager, G. The kitchen remade the dish but unfortunately felt it with home fries instead of salad. That’s when James Corden began yelling like crazy to the server: “You can’t do your job! You can’t do your job! Maybe I should go into the kitchen and cook the omelette myself!”

In this anecdote, Corden is a make-pretend disgruntled fancy-man in a Monty Python sketch. He is the bad-guy lion king, not from The Lion King, but from Robin Hood, with all the rings. He is the Boss Baby in a distant sequel called Boss Adult. He is the archetypal nightmare customer that everyone who’s ever worked in the service industry has a story about, only he’s famous, and he’s famous for being a cheery, friendly guy on TV. It’s the Ellen trap, or the Wife Guy’s Dilemma: when you build your public persona around being some version of “nice,” it is doubly damning to dabble in dickery. (Also, don’t all omelettes have “egg white mixed in with the egg yolk”? Unless they’re all-white? Are all-yolk omelettes a delicacy in the Corden home?)

There is still time for Corden to do damage control and rectify the situation.

– Option one: He has a long night of the soul and seriously considers how the way he treats other human beings is not okay.

– Option three: He performs a kitchen ambush, crosswalk karaoke-style, in his mouse costumehops on a chef’s head, and takes the whole place over like Ratatouille from Ratatouille.

Until then, send us that all-yolk omelette recipe. We’re dying to try Item getting salmonella.