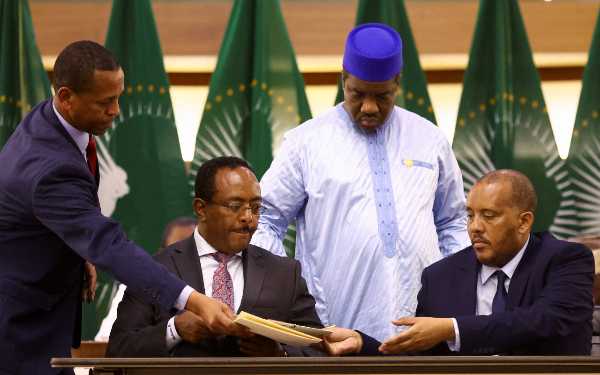 The mediator of the African Union, Olusegun Obasanjo, announced that the government of Ethiopia and the Popular Front for the Liberation of Tigray (TPLF) have signed an agreement for the cessation of hostilities in the framework of the conflict that is devastating the Tigray region (north ) since November 2020.

Although there are no exact figures, the civil war has left thousands dead and two million displaced, says the report of France 24.

Representatives of the Ethiopian government and the TPLF held a “high level” meeting, under the auspices of the African Union, and have signed the ceasefire agreement, although further details of the official document are unknown at the moment.

The talks were attended by former Kenyan President Uhuru Kenyatta and former South African Vice President Phumzile Mlambo-Ngcuka, as well as representatives of the Intergovernmental Authority on Development (IGAD), the United Nations and the United States.

The TPLF agreed to sit down for a dialogue with the Ethiopian government in early October, an initiative put forward by the AU to reach a “peaceful resolution of the current conflict.” One of the conditions of the TPLF was that during the negotiations there be “additional actors” as observers or guarantors.

The war has worsened in recent weeks after the outbreak of new fighting in August after five months of humanitarian truce agreed between the parties. The TPLF previously denounced a large-scale offensive by the Eritrean Army in support of Ethiopian forces.

The conflict in Tigray broke out in November 2020 after an attack by the TPLF against the Army’s main base, located in Mekelle, after which the government of Abiy Ahmed ordered an offensive against the group after months of political and administrative tensions. A “humanitarian truce” is currently in force, although both sides have accused each other of preventing the delivery of aid.

See also  Why does Loki's TVA have Skrulls (and Flerkens?)

The TPLF has accused Abiy of stirring up tensions since he came to power in April 2018, when he became the first Oromo to take office. Until then, the TPLF had been the dominant force within the ethnically based coalition that had governed Ethiopia since 1991, the Ethiopian People’s Revolutionary Democratic Front (EPRDF).

The group opposed Abiy’s reforms, seeing them as an attempt to undermine his influence.