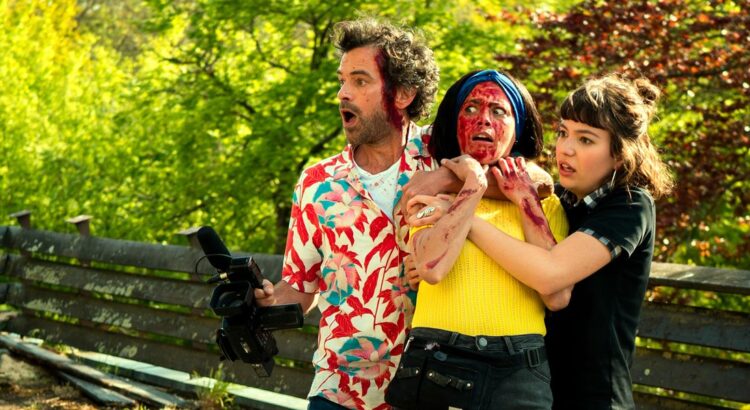 At a time marked by the recent trauma of the Covid pandemic and by the uncertainty created by Putin’s War, the 75th edition of the Cannes Film Festival kicked off by betting on escape and entertainment cinema, represented by ‘Corten! ‘, the new film by Frenchman Michel Hazanavicius, author of titles such as ‘The Search’ or ‘Mal Genius’. In his new job, raised as a horror comedy hybrid gory and satire of the world of cinema, Hazanavicius makes a remake of the frenetic and inspired 2017 Japanese film ‘One Cut of the Dead’ by Shinichirô Ueda, in which the shooting of a low-budget horror film was hit by the outbreak of a zombie invasion. Ueda’s film drank from a fertile tradition of comedies that have known how to exalt the cinephile passion that usually fuels the work of B… or Z filmmakers: films like Tim Burton’s romantic ‘Ed Wood’ or the wild ‘Why Don ‘t You Play in Hell’ by Sion Sono. For his part, Hazanavicius does not renounce all that legacy of works that have presented cinematographic art as the fruit of incendiary vocations, an art capable of consuming its practitioners while elevating them to the heights of creation.

The fate of ‘Cut!’ it is played out in its relationship to the original film, from which it borrows its temporal puzzle structure. The strange and surreal start of the film –in which a shoot appears riddled with anomalies and arrhythmias– opens a series of questions to which the story will give answers at the stroke of a hand. flashbacks Y flash forwards revealers. In a certain sense, Hazanavicius’s bet is somewhat mimetic with respect to Ueda’s work. At times, ‘Cut!’ runs the risk of becoming an elemental rereading of ‘One Cut of the Dead’; nevertheless, the French filmmaker knows how to pull out of his sleeve a plot twist that opens the doors to a peculiar intercultural dialogue. Thus, from the beginning of ‘Corten!’, the fact that some French actors (with Romain Duris and Bérénice Bejo in the lead) brings to life characters with Japanese names is striking. The relationship between the French and Japanese universes presents, in the film, a promising development, although also limited, and in any case highlights Hazanavicius’s interest in making works of a hybrid and impure nature: his saga of ‘OSS 117 ‘ functioned as a Frenchified parody of the James Bond universe, while ‘The Artist’ turned a French film star (Jean Dujardin) into the spokesman for the memory of silent Hollywood cinema.

Ultimately, ‘Cut!’ it shines thanks to its celebration of the artisan dimension of cinematographic creation, which shows its most rudimentary and imaginative face thanks to a cheerful collection of decapitations, severed limbs and other scatological gestures. Also noteworthy is the celebration of the collective nature of filmic praxis, an aspect of the film that, punctually, dresses up as a family and intergenerational drama. All these issues, in addition to working with a metafilmic narrative (in the manner of Michael Frayn’s play ‘Ahead and Behind’), were already perfectly outlined in ‘One Cut of the Dead’, something that does not detract from the efforts What does Hazanavicius do to vigorously trace a film based on the images of roots trash and in a comedy of popular character.

For those who believe in cinephilia as a creative force

The best: the conviction with which the group of actors plunges into the frantic gale of the film.

The worst: its status as a mimetic remake of ‘One Cut of the Dead’.

Synopsis: A group of friends set out to make a zombie movie in an abandoned building. Between technicians and reluctant actors, it seems that only the director is willing to invest the necessary energy to finish his low-budget horror film. But the unexpected appearance of real undead will disturb the original filming…

See also  They decorate the night! Tenoch Huerta and Lupita Nyong'o dance at the premiere of Black Panther | Video