“I have always been interested in the places bordering on morality”: Aura García-Junco | Video 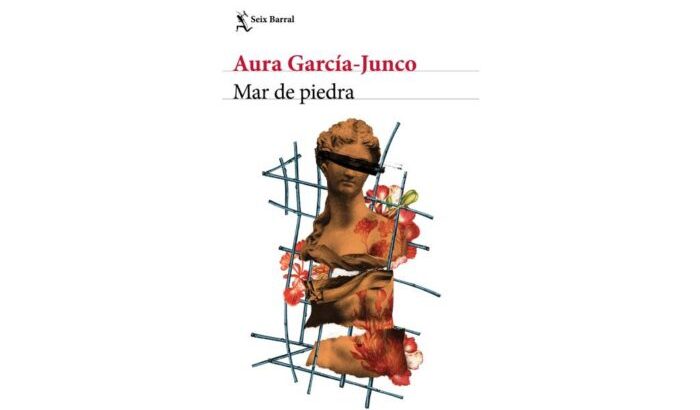 Let’s go to 2025 proposes Aura Garcia-Junco (Mexico City, 1988). Installed in the future, the writer builds a city full of statues and monuments that allude to those who have disappeared in recent years. The urban landscape as a symbol of the violence that crosses the country from north to south is one of the springs of stone sea (Seix Barral).

In the middle of the sculptures, “Sofía” meets someone from her past and from there a story unfolds that uncompromisingly raises the impact of forced disappearances on a society like Mexico’s and the risks involved in falling into astonishment, the selfishness and indifference.

It seems to me that the origin of stone sea is the observation, is it so?

When I started it I had no idea where I was going. It started like many other things I write, for something very intuitive, a Facebook post about polynic maps and navigation in the Pacific. That led me to decide to write a book centered on the idea of ​​islands and people as islands that do not communicate. In addition, he had the concern for the violence in which we live.

In the novel, urban space is important. Has its language been incorporated into the debate on gender equality?

Yes, there is a reflection of how violence is in the daily life of the city. The novel cooks a bit slowly in the sense that it does not start with a super violent situation, there is a relationship between a teacher and a student, something that will always have many ethical objections involved. That is the gateway for us to discover the consequences of the disappearance of a person in the psyche of someone who loved him. Through metaphors I reflect the mental process of the protagonist.

In your books there is an interest in transgressing morality, why?

I’ve always been interested in these borderline places of morality, where there are a lot of things that are super objectionable and that we can see badly, and at the same time I wanted to contrast them to form gray areas. Between the teacher and the student there is a big age difference, and yes, I show both their happy moments and those episodes where the hierarchical relationship has consequences. I like this litmus and the ability of literature to delve into the gray areas and dark places that we tend to block out.

When writing a novel, do you let yourself be carried away by the character or by your ideas?

My process is usually very intuitive from the beginning, this novel took me six years. The characters of “Sofía” and “Ana” were built from intuition. With “Luciano” it was different, I had to rewrite it a lot of times and therefore a more rational part came in. It is a mixture of both things, obviously there are ideas behind the characters, not just cosmic vibrations. Yes, there is also a construction of characters with deliberate ideas, but I didn’t want them to be archetypes of anything in particular, but only that they live situations with which perhaps we can relate because they have things in common with the generality.

There are even ideas that resemble your essay The day I learned that I don’t know how to love.

They are books that I wrote simultaneously. when i started to write stone sea, my original idea was to talk about people who are like islands and who live very lonely existences. Their own stories prevent them from relating to each other, that has a lot to do with the topics I touch on The day I learned that I don’t know how to love. However, I tried to make them very different books.

Why did you give so much importance to metaphor and symbolism in stone sea?

I had a hard time getting it to be a coherent and cohesive novel. The statues are an imposing symbol because they are and are not there. The characters are petrified as are the people around them. I thought they were a good metaphor to talk about a disappearance. The statues that I present in the novel fill the Center of Mexico City. It seems to me that the symbolism is so strong that it somehow creates the gravitational pull that pulls the characters together.

Do you think that in the face of violence we are a stunned country?

A large majority of people are desensitized because we have been living in such a violent situation for so many years, that everything becomes a kind of constant red note. This makes us live in this need to escape, because otherwise the world is unlivable and uninhabitable. If you start to see everything that is wrong around you, existence becomes something terrible, you can forget about the places of sweetness and love, which the world does have anyway. I don’t think we’re in a shock, I think we’re in a situation that tests all of our emotional coping skills.

As an author, how far did your original ideas move during the process of stone sea?

Very much. During the process, everything happened to me, also because ideologically it is a time when we are discussing many things. My idea of ​​feminism has changed and it shows in the way they ended up building the characters. Just as the context changed, I changed. Books are a reflection of who we are at a certain point in life.

I moved from not having anything very clear, to having some things clear. The feminism that interests me is inclusive, trans-inclusive. He is interested in dialoguing with men by speaking binary. It is a feminism that appeals to a broader social reconstruction and not only to that first stage that was a little more reactive, that was very necessary, but that I now see as a stepping stone to reach something else, a deeper dialogue to be able to begin to regenerate tissues that have deteriorated or have never been completely harmonious.

Do you think your literature is feminist?

I am a feminist and there will be some of that in my books, but I always try to make things more complex, and I think that has to do with the feminism that interests me. What matters most to me is that the characters are deep, well built. I can’t get rid of the gender vision even when I write, but I do try to have a very broad complexity within my work. If I see the characters from the outside, I think they don’t act in an ethical way, and that’s exactly why I like them. Who in life acts 100 percent ethically: no one? You would have to be a robot or not live with any person to achieve it.