Yellowstone Season 5 Cast and Character Guide: Who Plays Who? 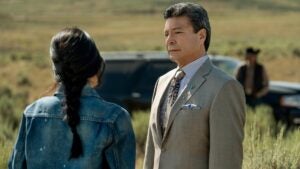 The middle child in the Dutton brood, Jamie is a lawyer who also schemes behind-the-scenes. Originally earmarked for the governorship, his father John ultimately usurped him, leading to a very awkward family dynamic. Or should we say “family” dynamic? Jamie has learned, over the course of the show’s four seasons that he was, in fact, adopted by the Dutton family. And in the past two seasons he has reconnected with his deadbeat father (Will Patton), who orchestrated a coordinated attack on the Dutton family. (It was shocking.) In the last season, Jamie learned that he had fathered a child and wound up murdering his own father, something that Beth has evidence of and is now blackmailing Jamie into staying with the family and helping her father succeed at all costs. Bentley made a splash in 1999’s “American Beauty” and has appeared in “Interstellar,” Disney’s “Pete’s Dragon” and “Mission: Impossible – Fallout” in the years since. On television he’s been a regular “American Horror Story” player, having appeared in the “Roanoke,” “Freak Show” and “Hotel” cycles.

See also  How to Create a Debug Station in Breathedge