Third detainee in the case of the femicide of Mónica Citlalli; Jonathan ‘N’ is prosecuted for concealment 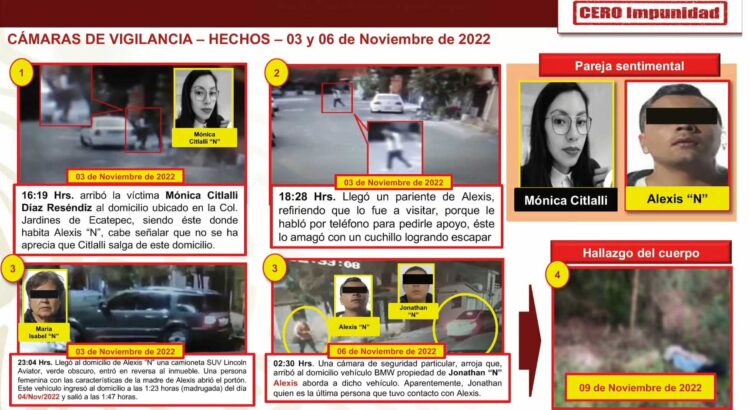 The Undersecretary of Security, Ricardo Mejía Berdeja, informed this Thursday of the arrest of Jonathan “N” for the cover-up of the femicide of the teacher Monica Citlalli Diaz Resendiz, whose body was found on November 9 in a ravine on the side of the Mexico-Cuernavaca highway, they requested that the maximum penalty be applied to Jesús Alexis “N” and his mother María Isabel “N”, detained in the case of the disappearance and femicide of the young woman.

In the morning conference at the National Palace, the official pointed out that A van entered the home of Alexis “N”ex-partner of the English teacher and main suspect in the femicide.

He said that there are indications that there I ask that Citlali’s body have been displaced. “All the video surveillance monitoring was very important to locate time, manner and circumstances of the last moments of Mónica Citlalli. There is no record that after having arrived at the home of his sentimental partner he had left, “he said.

According to the chronology of the events, the young woman arrived at 4:19 p.m. on November 3 at her partner’s home located in the Jardines de Ecatepec neighborhood, from which she never left. At 18:28 a cousin of Alexis arrived at the home, since he had asked for help by phone. After feigning him with a knife, the relative managed to escape.

At 11:04 PM a dark green Lincoln Aviator SUV arrived. A woman, apparently Alexis’s mother, opened the gate and the vehicle reversed at 1:23 a.m. on November 4 and left at 1:47.

On November 6, a private security camera captured the BMW car of Jonathan “N”, who arrived at the home and picked up Alexis “N” at around 2:30 in the morning. Apparently he was the last person who had contact with the main suspect.

This Wednesday, relatives of the teacher Monica Citlalli Diaz Resendiz, They asked that the Maximum penalty for Jesús Alexis “N” and his mother María Isabel “N”, the other two detainees in the case of the disappearance and femicide of the young woman.

This Wednesday the imputation hearing of both for the crime of forced disappearance committed by individuals with the aggravating circumstance of being a woman. The judge decided to postpone until this Thursday his decision to link the defendants to the process or not, to exhaust the constitutional term and carefully examine the evidence.

Defense attorneys claimed that they cannot be charged with the crime of forced disappearance because this can only be committed by the State, in addition to the fact that the young woman was finally found.

Fausta Reséndiz, mother of Mónica Citlalli, asked at the end of the hearing that the maximum penalty be applied to those indicated, who have not yet been charged with the crime of femicide, which is under investigation by the Mexico City prosecutor’s office.

In an interview with the media, he assured that the case is on the “right track” and demanded that the full weight of the law be applied to Alexis and his mother. “They made fun of my feelings, they went to the house to make fun of me and to say that my daughter was not there, he knew what he had done, the law was all about them”.

“The full weight of the law on them. He accompanied me to draw up the minutes, that’s why I have so much courage with him, because he made fun of my feelings, he saw me cry and he knew what he had done. Everything against him and his mom too, ”said the mother. 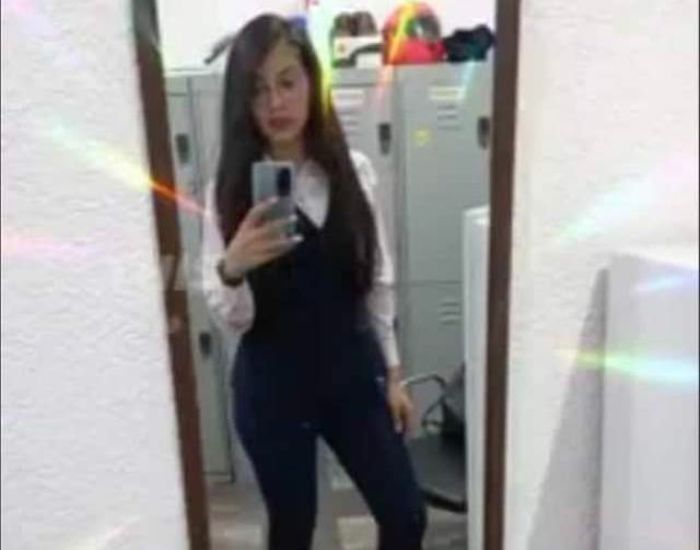 Juan Miguel, brother of Monica Citlalli, asked the capital’s prosecutor’s office to provide information on the femicide investigation and send the folder to her Mexican counterpart, so she can join the process.

The teacher’s relatives They denied that the defendants had confessed to their participation in the crime and they indicated that they reserved their right to testify because they considered themselves innocent.

According to the investigations, the last time the English teacher was seen was when she entered the home of Jesús Alexis. The young man was reported missing on November 5, two days after the disappearance of Mónica Citlalli was reported in Ecatepec, State of Mexico.

The Commission for the Search for Persons of the State of Mexico even issued a Search Sheet after reporting his disappearance, in Jardines de Ecatepec.

On November 13, a control judge issued the informal pretrial detention against Jesús Alexis “N” and mother, María Isabel “N”, 61 years old, who was also arrested on Saturday, November 12. Both were admitted to the Chiconautla prison, in Ecatepec.

The State of Mexico Prosecutor’s Office obtained the testimony of one of Alexis “N”‘s cousins, who said that on November 3 he went to help his relative, who He received him at his home with a knife in his hand and told him that he had “gone too far.” However, the cousin did not want to help him and left the defendant’s house.

See also  Do you want to limit the time your children use apps? google will help you

In a statement, the Prosecutor’s Office reported that after the arrest of Jesús Alexis “N” and María Isabel “N”, searches were carried out on two properties linked to the family.

In one of the searches, objects belonging to the teacher were found: “As part of the procedures carried out, FGJEM personnel carried out searches in two buildings located in the Jardines de Ecatepec neighborhood, in one of them they were found evidence of a criminal nature, as well as objects owned by the victim.”

According to journalistic versions, Jesús Alexis “N” had been a student at the English school where Mónica taught and a year ago his ex-partner, Patricia ‘N’ was found dead in the apartment they both shared.