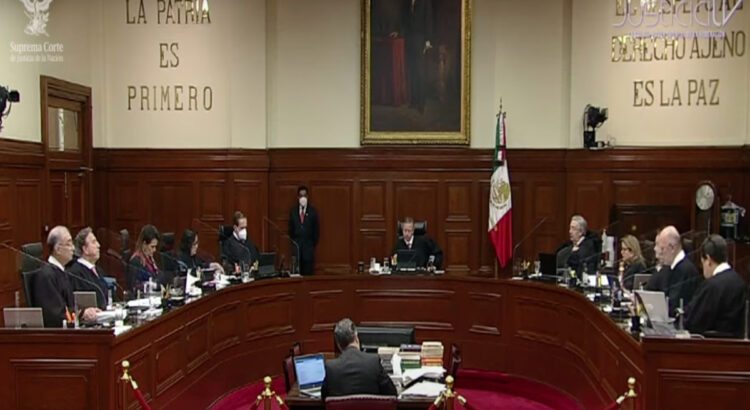 The Supreme Court of Justice of the Nation (SCJN) dismissed the project once again Resolution of Minister Luis María Aguilar that proposed declaring the unconstitutionality of informal or automatic preventive detention in any crime, which would have forced criminal judges throughout the country to justify on a case-by-case basis when it is necessary to impose preventive detention against an accused.

with votos against the ministers Yasmín Esquivel Mossa, Loretta Ortiz Ahlf and the minister Jorge Mario Pardo Rebolledo, the Plenary of the Supreme Court limited itself to approving the unconstitutionality of the articles that contemplate preventive detention for tax crimes such as the issuance, purchase and sale of false invoices, tax fraud and smuggling.

For the above, automatic preventive detention will continue to be applied to the catalog of crimes that it contemplated the National Code of Criminal Procedures before the inclusion of tax crimes, among which are intentional homicide, genocide, rape, treason, espionage, terrorism, sabotage, corruption of persons under 18 years of age, child pornography, tourism against minors, procuring persons under 18 years of age, pedophilia, trafficking in minors, against health, organized crime, sexual abuse or violence against minors, feminicide, burglary and cargo transportation robbery, in any of its modalities.

When analyzing a new draft sentence after the withdrawal of two draft resolutions on the subject on September 8, derived from the lack of agreements to approve a resolution that obtained a qualified majority on the subject, the claim of a majority of ministers to definitively eliminate the application of informal preventive detention through a new interpretation of article 19 of the Mexican Constitution.

The discussion was repeated in some of the fundamental issues on the subject, to the extent that Minister Alfredo Gutiérrez Ortiz Mena said that he did not intend to resubmit the arguments that he had already presented in the two previous debates on the subject, for which reason He limited himself to expressing the meaning of his vote.

Therefore, he announced his vote in favor of eliminating informal pretrial detention, that is, that in all cases, judges would have the obligation to debate the precautionary measures that should be imposed on the accused on a case-by-case basis and regardless of the crime. of which they are accused.

At the time of the vote, Minister Alberto Pérez Dayán also voted for the unconstitutionality of tax offenses, but noted that it was only for the purpose of declaring their invalidity, that is, he was not in favor of a consistent interpretation of Article 19 of the Constitution to Eliminate informal pretrial detention from the National Code of Criminal Procedures.

Minister Jorge Mario Pardo Rebolledo’s vote was very similar, although he was more explicit when pointing out that a new interpretation of Article 19 of the Constitution was not part of the litigation in this matter.

Thus, at the end of the debate, Minister Yasmín Equvel asked to clarify that the conforming interpretation of Article 19 of the Constitution to eliminate informal preventive detention proposed by Minister Luis María Aguilar’s project had only achieved six votes.

In response, Minister Arturo Zaldívar Lelo de Larrea said that the substantive arguments on the constitutional interpretation of the article that addresses informal preventive detention and its unconventionality in the face of the presumption of innocence should be reviewed, since in his case, imposing said precautionary measure automatically violates human rights.

See also  The Trouble With Bros