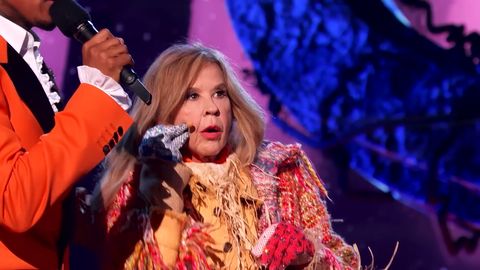 The Masked Singer featured another shock unmasking as The Scarecrow took their own mask off before the first vote of the show even took place.

And the person behind The Scarecrow left fans bewildered — Oscar-nominee and Golden Globe-winner Linda Blair was the celebrity under the scarecrow costume. This unmasking came after she had performed The Steve Miller Band’s Abra Cadabra.

Blair, who is best known for her starring role in The Exorcistspoke to ew about why she unmasked herself, which came for the sake of a good cause.

Blair told EW she has worked extensively for 16 years to rescue animals, which began when she worked during Hurricane Katrina. She agreed to participate in The Masked Singer to raise awareness for animals in need and animal rescue centers across the US.

“I ran around the stage, I performed, we picked a fun upbeat song, and when I chose to unmask, I had to explain that I wanted the other people to compete properly because this was their livelihood,” Blair said.

“And for me, my plea was strictly on behalf of the animals and to thank everyone at Fox for the wonderful show. I love The Masked Singer. I’ve been a fan forever.”

Blair implored people to donate to the Linda Blair WorldHeart Foundation, which is the animal rescue service she founded and runs. Blair asked people not to buy puppies or “turn animals into the shelters” but instead ask for help from charities like hers.

This is not the first time a contestant has eliminated themselves – Mickey Rourke took off his Gremlin mask during season 4 when the wacky show got too much for him.

Rourke, who is also an Oscar nominee, and Blair are also not the only Hollywood actors to appear on the show. Ryan Reynolds spoke about the “hell” of his recent cameo on the show.

Blair is the latest celebrity to be unmasked after Chris Jericho and Adam Carolla were unmasked last week, while George Foreman and George Clinton were unmasked before that.

The Masked Singer US airs on Wednesdays at 8pm on Fox.

Save on selected Samsung Galaxy S22+ contracts with Sky

Looking for a PS5? Visit our stock guide