‘Avatar 2’ Teaser: Na’vi Take a Stand Against Invading Army With the Help of a Giant Whale (Video) 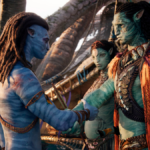 20th Century Studios and Disney have entered the television spot phase of their “Avatar: The Way of Water” marketing campaign. With many tentpole promotional campaigns, the shorter, more targeted television spots tend to be less grandiose and more comical than the theatrical trailers. This first TV spot seems to fit the bill, selling not soaring views or enchanting fantasy but conflict and action.

The key imagery this time out is that of Jake, Neytiri and the kids reacting with fear, horror and concern as armed humans advance by speedboat to do them harm. The second half of the clip of course shows Jake rallying his tribe(s) to action and promising to make their stand as the Na’vi proceed to team up with the creatures of Pandora to kick righteous ass. Those dudes who get flipper-flipped into the air by a giant whale-type creature probably aren’t going to be in “Avatar 3.”

The theatrical trailers highlighted visual spectacle, Pandora-specific fantasy and unapologetic melodrama, essentially selling the film as a new picture from the guy who helmeted “Titanic.” This clip reminds audiences that James Cameron’s “Avatar: The Way of Water” is also directed by the guy who helmeted “Aliens,” “Terminator 2: Judgment Day” and “True Lies.”

To paraphrase “The Lost World: Jurassic Park” (directed by another candidate for Hollywood’s best living action director), the commercial promises that “Avatar: The Way of Water” is going to have plenty of “ooh and ahh” but also lots of running, screaming and explosive (but PG-13 safe) violence.

See also  Why 'Star Trek III: The Search for Spock' is a top-tier Trek

20th Century Studios and Disney will surely cut a plethora of TV spots between now and Dec. 16 with others focusing on romance, tragedy, kid-friendly humor and gee-whiz fantasy alongside the action-centric spots and (presumably) critical acclaim commercials.