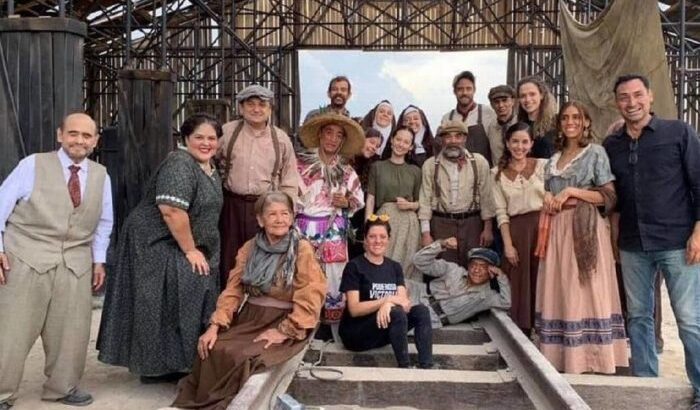 Within the Mexican cinema, The Mighty Victory it is an exceptional case. Despite being rejected for the stimuli given by the Mexican Institute of Cinematography, the first film by the Guadalajara Raul Ramon has the performances of interpreters such as Damian Alcazar, Joaquin Cosio Y Luis Felipe Tovar.

Set in 1936, the film tells the story of the inhabitants of La Esperanza, a town lost in the desert that one bad day receives the news of the closure of the mine that provides most of their income. With the measure they also close their only railway route, in reaction Durán, a young machinist decides to build together with the rest of the inhabitants of the town, a steam machine and with it fulfill an old dream.

By dint of a script with more than ten years of work and “a lot of heart”, Raúl Ramón’s film reaches more than one hundred theaters nationwide.

I have the impression that The mighty victory It is a film that has its origins in childhood and a taste for adventure films.

That’s right, I’m from Hermosillo and in the back of my patio were the dunes of the Sonora desert. The only attraction that my dad could offer me then was to take me to count the railroad cars, so there is a very autobiographical part.

Sonora is a state with an important railway tradition.

Of course, in elementary school I learned about the story of the hero of Nacozari. In Sonora there is clearly a railway vocation and I think it is beautiful that this community turned to the film and gave us a dozen recognitions.

Today trains are practically non-existent, is there a nostalgic component in this work?

What one seeks as a scriptwriter or director is to move the viewer and it seems to me that the country’s railway culture is greatly wasted. I think this is the third film dedicated to the train in Mexico. The first is the ghost train, a silent film; the second is black wind, of the time of ora; and just now, Mighty Victoria, she returns to do him justice.

Damián Alcázar and Joaquín Cosío act. How do you get a cast with this poster for a first film?

I think the script is solid and I had the opportunity to work on it with Vicente Leñero for ten weeks. I’m a lousy salesman and it was my wife Fabiola, who sat down to talk with Damián Alcázar, who I think deserves at least an Ariel nomination for Best Actor. Perhaps they also found it interesting that it is a film that moves in the opposite direction to what is done in most Mexican cinema.

In principle, the role played by Damián Alcázar was going to be done by Fernando Luján…

Yes, he had gladly accepted, but he died in January 2019, that put us in a predicament because we needed to shoot between March and April. Thanks to the efforts of my casting director, Paulino Partida, Damián received the script. We were fortunate to meet him at the Guadalajara Film Festival, my wife talked with him and they found a way for him to participate in the project.

How did you decide to make a period film with few resources?

See also  iPhone 12 and mini in stunning purple: when to buy and how much explained

We put all our resources in front of the camera. We suffered a lot of discomfort, we had no air conditioning, no cranes, no helicopters, I told the team and they all agreed. The Mighty Victory it was done with a lot of heart.

The film pays homage to genres such as the western.

My training is as a photographer and somehow The Mighty Victory It is a reflection of the type of cinema I like and the type of person I am. I love Italian cinema, that of Spielberg and Robert Zemeckis, but also roadrunnerso all of that is present.

The film has one foot in auteur and commercial cinema, what do you think of the division between one and the other?

Will the IMCINE give up for not having supported your film?

The IMCINE is never capped. We have been left with a lot to owe in terms of decentralization and defense of resources. It seems to me that the people who make movies outside of Mexico City have a lot of merit. Lately they have looked for me and have offered to accompany me to festivals, but the truth is that it is possible to film outside the capital and if we have good stories we will attract the public.