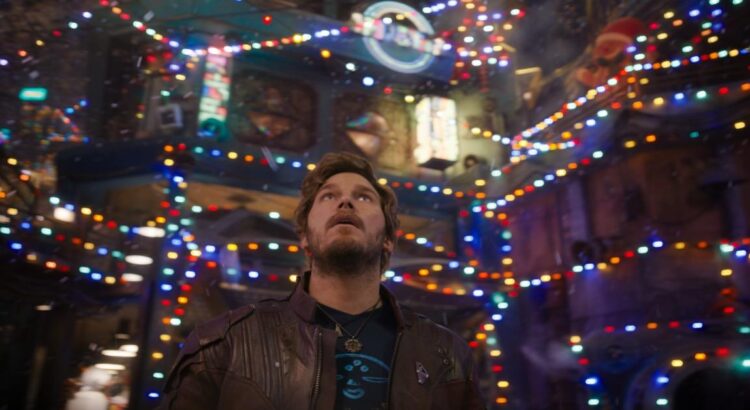 ‘Twas the night before Guardians of the Galaxy Holiday Special, and not a critic was stirring. That’s because the first reviews for the Marvel Studios Special Presentation streaming Friday on Disney+ have already arrived online. In the spirit of the Star Wars Holiday Special, writer and director James Gunn tells a yuletide tale with celebrity appearances and a musical performance. But instead of Life Day and Wookiees, the Guardians of the Galaxy Holiday Special celebrates the traditions of Earth’s Christmas season with Peter Quill/Star-Lord (Chris Pratt) and aliens Drax (Dave Bautista) and Mantis (Pom Klementieff).

comicbook.com:”Guardians of the Galaxy Holiday Special gives Marvel Studios a Christmas hit and fans should be very excited for it to hit Disney+. With some very good performances, this is sure to be a gift you want under your tree.”

Variety: “There will be no coal in James Gunn’s stocking this year. His Guardians of the Galaxy Holiday Special is stuffed with funny, feel-good Christmas joy, and it’s one of the best pieces of content Marvel Studios has released in years.”

The Hollywood Reporter: “The script is sprinkled with crumbs of awkward (though thankfully easy to ignore) exposition that will surely become relevant once [the Guardians] return to theaters in 2023’s Guardians of the Galaxy Vol. 3. And the whole project is underwritten by the kind of studio clout and money that can get Kevin Bacon to show up and hang out with aliens for a few days. And yet it all works, at least if (like me) you’re a bit of a sucker for the Guardians to begin with. It’s funny enough to provoke out-loud laughter and poignant enough to elicit that telltale sting behind the eyes, if not quite enough to draw full-on tears. Maybe it lacks the heft of a true guardians feature or series, but it’s exactly the holiday confection you’d want from this motley crew: shiny, fluffy and just odd enough to feel personal.”

rollingstone: “What you get is more or less what you’d think a holiday special from Gunn and the Guardians would be. Even the special’s soundtrack is on-brand… Sure, you’ll miss Pratt’s minimal contributions if you blink, and the small bits with Bradley Cooper’s Rocket Racoon, Vin Diesel’s surly teen Groot and Maria Baklova’s Cosmos the Telepathic Soviet Spacedog feel more like contractural contributions than anything else… But if the sight of Drax grinning like an idiot while wearing a garish sweater featuring a bear shooting lasers out of his eyes, then it seems your Christmas came early this year.”

TheVerge: “It’s a goofy Christmas caper, but the special also feels like a prologue to the next Guardians movie. Now, to be fair, it’s at least a fun addition to the MCU. The special clocks in at less than an hour and is basically a feel-good Christmas story with some sci-fi shenanigans thrown in.”

The Indian Express: “Somewhat boldly, Gunn has drawn comparisons between the guardians special and the infamous Star Wars Holiday Special from 1978, which remains, even after all these years, one of the most infamous pop-culture artifacts ever created. But Gunn hasn’t restricted his homage to him to merely a hat-tip in Chewbacca’s direction; he has gone ahead and bookended the Guardians special with animated sequences designed to mimic similar scenes in its Star Wars counterpart… Despite the inauspicious overlaps, however, Gunn’s film neither undermines the main feed, nor does it reek of a cash-grab. On the contrary, it’s quite a delightful distraction from the larger machinations of the MCU.”

deserted: “Guardians of the Galaxy Holiday Special is a warm, heartfelt hug from the MCU, and the perfect gift the franchise could give: a reminder of what makes this team so beloved.”

/Film: “We’re stuck with rather predictable humor and not one but two different lengthy musical numbers that play more like time-fillers than anything else. But the mood remains light, and those seeking sweet sugary confections in the form of entertainment will probably have fun At the very least, the special never overstays its welcome. In fact, that’s part of the problem – it’s so quick and airy that it leaves you wanting more. There’s no sustenance here, just empty calories. This ultimately feels like something someone can throw on in the background while they decorate their Christmas tree. Happy Holidays, I guess!”

See our viewer’s guide for everything you need to know about watching the Guardians of the Galaxy Holiday Special.

See also  How to find Legendary Xerneas in Pokémon Snap