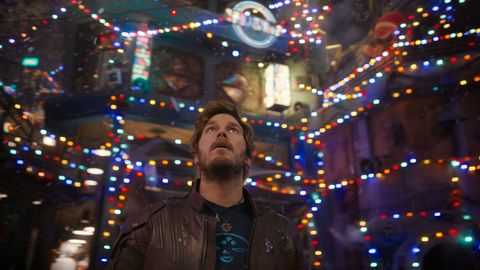 Christmas has come early for Marvel fans as our favorite ragtag band of heroes, the Guardians of the Galaxy, are back on Disney+ with their holiday special.

The hugely entertaining special is largely a standalone festive romp as Drax (Dave Bautista) and Mantis (Pom Klementieff) are finally given center stage as they head to Earth to abduct Kevin Bacon (present-day Kevin Bacon) as a Christmas present for Peter Quill (Chris Pratt).

However, as James Gunn teased ahead of its release, the holiday special reveals several changes to the team ahead of the much-anticipated Guardians of the Galaxy Vol 3and there’s also one major revelation that could affect the third – and final – guardians movie.

In order to go into how the holiday special sets up the threequel though, we need to get into some major spoilersso don’t read on if you haven’t seen the new special yet.

How the Holiday Special sets up Guardians of the Galaxy 3

The holiday special takes place after we last saw the Guardians in Thor: Love and Thunderand either since those events or before them, the team has been through some ch-ch-ch-ch-changes.

Nobody has left, but they’ve got a sparkly new massive ship called the Bowie, a new team member in the form of telekinetic talking dog Cosmo (voiced by Maria Bakalova) who we will instantly die for, and they now own – and apparently run –Knowhere.

In Thor: Love and Thunder, the Guardians still had the Benatar, so they’ve clearly upgraded that in the time since that movie. Gunn has confirmed to a fan on Twitter although that the ship still exists, so it’s not because it was destroyed.

As for Cosmo, it’s unclear when the dog became part of the team other than it was after their adventures with Thor. They also might have been living in Knowhere at the time of love and thunderbut no specific timeline is given other than Nebula (Karen Gillan) confirming they bought the place from the Collector.

(Knowhere was left in a bit of a state by Thanos in Avengers: Infinity War if you’re wondering why it’s in such a mess.)

Watch The Guardians of the Galaxy Holiday Special on Disney+

It’s unlikely we’ll get much more explanation about any of these elements in the third movie. Gunn explained that he used the holiday special as a “Trojan Horse” to include new elements that are important for Vol 3avoiding the need to explain them in the threequel.

The likes of Knowhere as a location and Cosmo – and even Kraglin (Sean Gunn) – being a firm Guardians member now might not seem as though they’ll be important in the third movie. However, there is one major reveal that could have a part to play.

It’s confirmed in the holiday special that Mantis and Peter are brother and sister as Mantis’s father is also Ego (Kurt Russell). She had already told Drax the truth and she finally tells Peter at the end of the special, which he sweetly calls “the greatest Christmas gift I could ever get.”

This revelation was originally part of Guardians of the Galaxy Vol 2but the scene was cut from the final movie.

In the sequel, we were told that Mantis was found by Ego when she was just a larva and raised on his planet. However, there was a scene where one of Ego’s love interests was Mantis’s mother, confirming Mantis’s familial connection from her to Peter.

Now that it’s been restored as canon in the MCU, it strengthens the overall theme of Gunn’s trilogy. Vol 1 was about finding his own family, which was further explored in Vol 2 where Peter chose his adopted family over his actual father.

If both movies have, in one way or another, been about Peter’s mother and father, it stands to reason that a key theme of Vol 3 will be about Peter’s relationship with his newly-discovered sister Mantis who is both his actual family and part of his adopted family.

And now, if we’re being totally honest, we’re worried about the fate of Mantis in the third movie.

“I read that script with Pom Klementieff, who plays Mantis,” Gillan revealed in July 2021. “We read it together and we both cried and laughed, but there was full tears… It’s brilliant and it’s emotional and it’s funny and it’s all of those things that you want.”

Mantis sacrificing herself to save her brother Peter? We could see it, but we’d be happier if it was the other way around. We’d obviously take no deaths whatever, of course, yet it’s the final guardians movie with this team, so all bets are off.

Save on selected Samsung Galaxy S22+ contracts with Sky

Save on selected SIM-only deals with EE

Looking for a PS5? Visit our stock guide