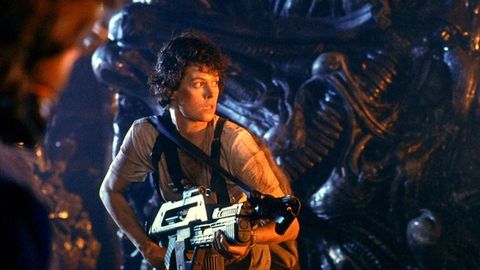 ‘Alien, the eighth passenger‘ is widely regarded as one of the best horror movies ever, and the sequel launched shortly after its theatrical success. But James Cameron, who replaced Ridley Scott as director on the second installment, had the difficult task of convincing leading lady Sigourney Weaver to return as Lieutenant Ripley. To achieve his purpose, Cameron even used Arnold Schwarzenegger’s agent in a diversionary maneuver.

Ripley’s presence in the ‘Alien’ sequel was vitally important, making her almost instantly an iconic heroine. But Weaver wasn’t very up for the job.. Cameron then had to devise a strategy (in love and in war anything goes) to “deceive” her and bring the actress back. As the director himself explains in an interview for GQ, his plan was to imply that he was going to rewrite the film’s script and hire Schwarzenegger as the new star of what would end up becoming one of the best action movies in history.

“I called Lou Pitt, Arnold’s agent, and said, ‘Lou, we’re over this. We really like the story and all the Marine Corps characters and the world that we’ve created and everything. And really, we’ve thought about it, we don’t need sigourney”, he recalled. “I have created all these characters, and my pride of authorship tells me that I must go ahead with this, and we will simply delete his character. We will not reformulate it; I’ll just rewrite it. I’m going to start on that tonight.”

Cameron admits that he never intended to cut Ripley from the script, it was all part of his Machivellian plan to achieve his goal:

“Did he have any intention of doing that? Not at all. But I know that Lou is in the same agency as Sigourney’s agent, who was in New York. And I learned that the moment he hung up on me, he called him and said, ‘Sign Sigourney now.’ And guess what? The deal was done just 12 hours later. I never wrote a word of that hypothetical story I said I was going to do, and I had no intention of writing it anyway. The thing is, it worked, Sigourney got the million dollars from him, and everyone was happy.”

Can you imagine ‘Aliens: The return’ without Sigourney Weaver?

See also  WandaVision: Agatha will have a solo at Disney + Pride Celebration