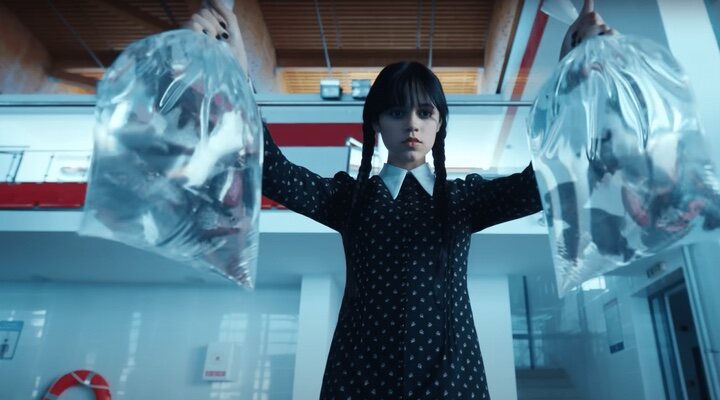 ‘Wednesday’ has been released on Netflix this week, specifically and ironically, on Wednesday, November 23. The platform has not yet ruled on renewing the series for a second season, but its showrunners have, Miles Millar and Alfred Cough, who have claimed to have plans for the next installment.

As the showrunners have commented to TVLine, Looking ahead to the second season, they want to continue delving into the complex nature of the protagonist, Wednesday Addams (Jenna Ortega), and her relationships with the rest of the characters. On the other hand, they would also like to incorporate the rest of their macabre family into the main plot. “The series is about a girl who sees the world in black and white, and learns that there are shades of gray. I think that, like any relationship or friendship, it can be complicated by other factors. It’s never going to be easy. And it’s really her who learns to navigate the ups and downs of friendship”, Gough explained.

The series focuses exclusively on the character of Wednesday and, although we will see and meet the other members of the Addams family, they will not have as much prominence in the plot. Still, Millar has been flattering about the actors who play the rest of the family, and has wanted to talk about them to TVLine. “We feel like we’ve only scratched the surface with those characters, and the actors are amazing in those roles”, Miller commented. “I think Catherine is an iconic Morticia. The relationship between Wednesday and Morticia is also essential to the series, and the idea that Wednesday is trying to carve out her own path outside of the family is important”.

Millar clarified that, although they want to influence the rest of the Addams family more, the dynamic will not change for the second season, Because they want “focus the series on the character of Wednesday”, explained. “Definitely, if we get a second season, we want to introduce the family like we did in a couple of episodes on this one.”

‘Wednesday’ is about Wednesday Addams’ years at Nunca Más Academy, where we see the teenager’s attempts to master her budding psychic ability.. The protagonist plans to stop a growing wave of murders, in addition to trying to solve a paranormal mystery in which her parents, Morticia (Catherine Zeta-Jones) and Gomez (Luis Guzmán), were involved 25 years ago.

The series consists of 8 episodes of 45 minutes and is already available on Netflix. It is directed, perfectly chosen, by Tim Burton, who is also part of the production team. The main cast is completed by Isaac Ordoñez as Pugsley Addams, Gwendoline Christie in the role of Larissa Weems and Christina Ricci as Marilyn Thornhill, among others.