And after the marches… what?

The country is divided. Three days after the end of the fourth year of the government of Andrés Manuel López Obrador, the differences are deepening, the positions are radicalizing and the bridges seem to be cracking.

He has two years left in the six-year term, and there are 18 months left for the presidential elections; however, the margins for coincidences continue to narrow, and everything is heading towards the presidential succession.

If the march on November 13 meant a breather for a battered and lost opposition, the one on November 27 functioned as a show of force by the government apparatus.

For the opposition, the 13N march served to stop a constitutional reform in electoral matters; not because the government has paid attention to those who marched, but because it forced the PRI to close ranks against the president’s initiative.

For the ruling party, 27N served to start its electoral march; to display and display; to show that they are more -probably many more- than the opponents; but also to make excessive -and shameless- use of the government apparatus and the means of the State to mobilize hundreds of thousands around the leader.

After both marches, the terrain and the tone in which the 2024 presidential, legislative and local elections will be held are becoming clear.

There will be no truce between opponents, nor points of contact. What’s more, if Plan B of the electoral reform prospers, there will be no consensus on the rules of the game and the referee of the contest either.

The marches of 13N and 27N are not a point of arrival, but a starting point. They imply the starting signal for a contest in which the subject is, and will continue to be, López Obrador.

This Sunday’s march, the one on 27N, will go down in history for the shocking image of the president walking in the middle of a crowd for more than five hours to get from the Angel of Independence to the capital’s Zócalo, and for a slogan: “Mexican Humanism , not re-election”.

The “mother of all marches” also means that López Obrador is entrenched in his movement and that he has definitively given up governing for the rest of society.

The president shows the muscle of the parties that in June 2024 will seek to guarantee continuity to the fourth transformation, and announces that, as Vicente Fox did in 2006, he will enter the election as one more actor in contention, not as a legally bound official to impartiality. 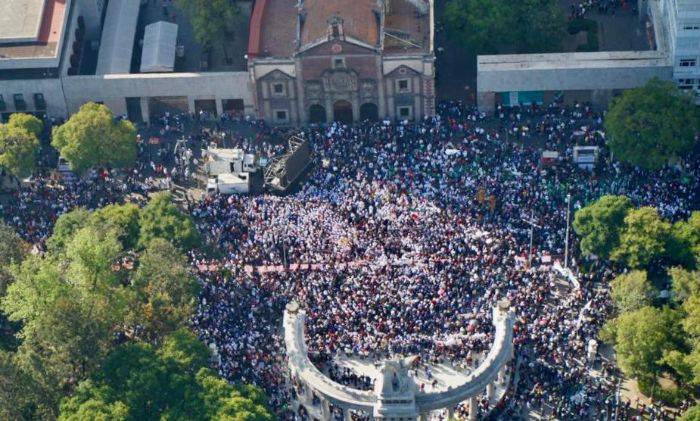 López Obrador used the march to attack his opponents, whom he does not dismiss as “conservative hypocrites.” He defends “what has been achieved” in his six-year term, omits what has been frustrated, and contributes to his own the themes and slogans of the next campaign.

After trudging from the Independence column to the National Palace, the president spoke for an hour and a half to describe the country he envisions: a “sanctuary of freedoms,” where there is no longer corruption, cronyism or influence; a nation in which the battle against racism, classism and discrimination is being won.

In his story there is no room for self-criticism, dissent or the slightest dissidence, and the message goes beyond closing ranks; it is also the warning that whoever did not march is out.

That is why governors, cabinets, legislators, aspirants and propagandists passed the list; that is why the “corcholatas” paraded in the front row, as close as they could to the president; for this reason the absence of Ricardo Monreal is significant.

The march also shows that, with two years to go, López Obrador’s six-year term is beginning to run out, due to a succession to which he himself has been advancing the times.

His march is the start of the campaign, and his speech, a kind of instructive for his party-movement.

López Obrador leads by example: after his departure, his followers will also radicalize their speeches and positions.

The campaign has begun, and the possible reform of the rules of the game has yet to be discussed.

While all this was happening in Mexico City, 500 kilometers away, the Guadalajara International Book Fair was beginning to pick up pace and tone.

The most important cultural event in Latin America was despised by the 4T, with the conspicuous absence of the federal government, at least in the first days.

Through the corridors, tables and presentations of the FIL, many of those who the government considers opponents parade.

The ideas of the presumed dissidents point, to a large extent, to the criticism of everything that was exhibited between the Ángel and Zócalo.

Yesterday, at noon, a petite and smiling woman left the square at Expo Guadalajara: Elena Poniatowska, who preferred to be present at the fair of ideas than in the so-called “people’s march”.