Manuel Jabois learns to cook with the help of Diego Guerrero 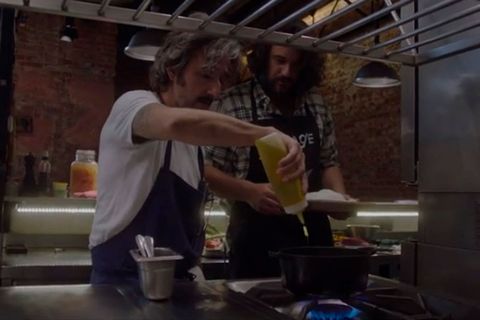 Manuel Jabois is an expert in telling stories but, until now, the stoves resisted him. “Overwhelmed.” This was the journalist Manuel Jabois before asking for help from his friend, chef Diego Guerrero. The Galician had gotten into trouble: he had invited his lifelong friends to eat at home but he had never made them a single sausage, so he did not know what to prepare to leave a mark on them. Hence, Jabois picked up the phone and met his friend, chef Diego Guerrero, to lend him a hand. A few weeks ago, Jabois managed to transfer the creative part of the chef from the stove to the description of his dishes. And the result was spectacular. The same will happen in reverse: Will Manuel be able to create an unforgettable menu for his guests?

In the meetings that we are living and that we are narrating thanks to #inspire2 We have discovered how to get out of your comfort zone and ‘explore’ unexpected fields can bring you big surprises. Nawja Nimri and Palomo Spain and Maribel Verdú and Iván Ferreiro are some of the well-known faces that have revealed the curious ways to achieve inspiration to show their hidden talents and that we have known thanks to KIA. Now it is Manuel Jabois who leaves his comfort zone.

Journalist and chef meet for a cooking class. Diego warns Manuel: “You can’t be a cook in a day”, but he also encourages him in the face of this difficult challenge: “You can get this out of it”. And so between tomatoes, tuna from the north and cooking tricks, Jabois begins to elaborate that special menu in his head.

And said and done, Manuel creates a spectacular menu and calls his friend to see what he thinks. “A first one that has to do with my childhood, steamed mussels with a little lemon, a little bay leaf and albariño; a marinated bacon carpaccio with a touch of citrus, wild; Y a squid sandwich with crystal bread, like a transfer of powers between Galicia and Madrid so that they understand that that was what I ate from time to time when I got here”, he tells Diego, who describes it as “unbeatable”. Especially when he tells him about the dessert: “It is a tribute to my son, bread with chocolate , I used to take it when I was little and now he takes it.”

Manuel Jabois couldn’t be happier and now, without stress, he commented: “Nobody wants to leave their comfort zone. Me neither, it’s scary, but sometimes it is necessary to go out for a little while; even if it’s to come back fresher and to create, and to be a better person. And that’s a lot. I have been lucky enough to look for inspiration in a guy as great as Diego, but the really important thing is that I have realized that I can achieve what I propose if I workI have the necessary tools and the help of someone as generous as him”.

tenminutes.es
In Diez Minutos we inform you about the latest news from the heart and the monarchy and about your favorite reality shows, series, soap operas and television programs.