What remains unsaid is often as important as what is said in “Sr.,” an emotional documentary directed by Chris Smith about the relationship between Robert Downey Jr. and his namesake father, a director of counterculture movies of the late 1960s and the 1970s.

Mr., who begins to physically decline due to Parkinson’s disease as this documentary progresses, is a quietly controlling sort of guy who deflects personal questions. When his son asks him about the title of this movie, Sr. says, “I like it, but we can do better” in an offhand tone of voice that sounds a lot like Alan Arkin, who was a friend of Sr. and is interviewed here.

In Sr.’s office, there is a poster of Jean Renoir’s “La Grande Illusion” next to a poster of Charles Busch in “The Lady in Question,” and this reveals Sr.’s dedication to the spirit of downtown New York theater , which is where he met and married Elsie Ann Ford, who acted in his movies and gave birth to both Robert and his sister Allyson.

We see short bits of early Sr. movies, which have titles like “Sweet Smell of Sex” and “Chafed Elbows,” and then his breakthrough film “Putney Swope,” which led to larger budgets and a burgeoning problem with drugs that touched both father and son, who appeared as a young boy in many of these Mr. pictures.

“Mr.” records conversations between the Downeys in which Jr. attempts to make a narrative out of their life story; they are very different in style and in temperament, and this is partly generational. Sr. is a slow-talking wisecracker who keeps his thoughts and feelings close to the vest, while Jr. has a quicksilver delivery that is far more modern. “How are you?” asks Sr. on the phone, and Jr. right away comes back with, “Sometimes…I wonder!” in a rapid-fire, “upset,” and very campy tone of voice. Even given his age and illness, Sr. feels like the bear or the tortoise while Jr. feels like the rabbit or the fox. 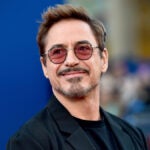 Jr. was doing drugs around his father from a very young age, but somehow he managed to pull himself out of that, and now he is a prosperous movie star worth enormous amounts of money. One topic that is never broached in “Sr.” is what Downey’s father thinks of the “Iron Man” movies and the like that have made his now-sober son so much money but limited him as an actor, but this is one of many dangerous subjects that are avoided here.

Jr. says in this movie that filming his father’s decline feels natural because in his youth they were always filming everything. “When I saw cameras, I perceived it as time with my Dad,” Jr. says, and the cameras here catch Sr. in moments where physical pain breaks through the cultivated deadpan mask he wears. Father and son are both given to joking through things, but Sr.’s illness and impending death gradually weaken their defense mechanisms. 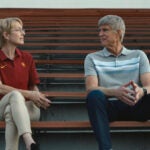 When Sr. has lost his mobility and is confined to his bed, he still makes suggestions about how to live up this documentary with some of his trademark absurdist touches. He thinks that Jr. should suddenly appear from behind a tree and sing a Schubert song in all seriousness, and Jr. takes this idea and does it in his own less random way. “It all looks sweetly narcissistic,” Sr. comments when he sees this footage, which tips us off that there is a much sharper man under the “laid-back” persona he often presents to the camera.

“Mr.” is very touching in the last scenes before the death of the patriarch, who was more permissive with himself and his family than he should have been. Jr. has a moment here where he offers a bit of espresso to his own son and then immediately says, “Don’t tell Mom,” and so worrying about childhood caffeine intake has replaced his own anything-goes childhood, where he was “ in charge of the hash pipe.” That period for both Sr. and Jr. could have led to disaster, but both of them somehow came through.

If “Mr.” doesn’t provide any special insights into how that happened, it does offer touching father-son scenes preached on forgiveness and love.