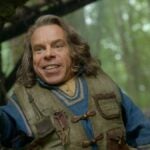 One of the villains of “The Lord of the Rings: The Rings of Power” will look quite different when Season 2 of the epic fantasy Amazon series rolls around. The role of Adar, the elven leader of the orcs who basically created Mordor at the end of Season 1, has been recast for the second season and will now be played by Sam Hazeldine.

The character was played in Season 1 by “Game of Thrones” alum Joseph Mawle. Hazeldine’s credits include “Peaky Blinders,” “Slow Horses” and “The Sandman” in which he played Barnaby. He’ll next be seen in the Apple TV+ series “Masters of the Air,” a sequel to “Band of Brothers.”

The Adar recasting was announced as part of a slew of new additions for the “Rings of Power” Season 2 cast, which included Gabriel Akuwudike, Yasen ‘Zates’ Atour, Ben Daniels, Amelia Kenworthy, Nia Towle, and Nicholas Woodeson.

As was the case with all Season 1 casting announcements, the roles these performers will be filling are under wraps.

Akuwudike is a British-Nigerian actor whose credits include the Prime Video series “Hanna” and “1917.”

Atour played Coen in “The Witcher” Season 2 and also starred in “Young Wallander.”

Daniels played Lord Snowdon in “The Crown” and Walter Sampson in the Netflix series “Jupiter’s Legacy,” and also appeared in “Rogue One: A Star Wars Story” as well as numerous stage productions.

Kenworthy is a Royal Academy of Dramatic Arts alum who will make her television debut in “The Rings of Power.”

Towle was most recently seen in the Netflix film “Persuasion.”

See also  The Lord of the Rings: 9 of the prettiest things Sam did

Woodeson’s credits include “The Honorable Woman,” “Rome,” “The Hustle” and “Paddington 2,” and is also a graduate of the Royal Academy of Dramatic Arts. “The Lord of the Rings: The Rings of Power” Season 2 is currently in production in the UK