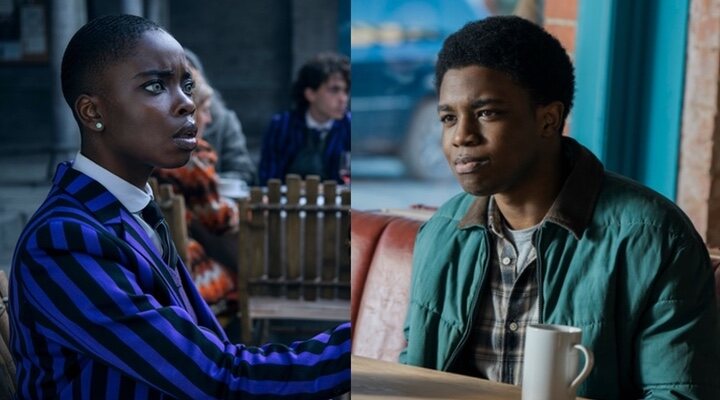 Taking a first look, ‘Wednesday’ seems like a series that fulfills the expected function of diversity. An example of this are several main characters, such as the Addams family itself, where the titular character is played by the Latin actress Jenna Ortega (yes, powdered with talcum powder) and in the boarding school students you can see “outcasts” of all kinds . However, once they have looked more deeply, fans have realized that black characters are mostly villains.

In the first place, the great antagonist of Wednesday is Bianca Barclay, the “mean-girl” of the boarding school, played by the magnificent actress Joe Sunday, of Nigerian origin. On the other hand, one of the great stalkers of little Addams is played by the black actor Iman Marson, who is also the son of the corrupt mayor who owns Pilgrim World, a museum in honor of pilgrims and colonizers. This hypocrisy has not gone unnoticed either, since it places black characters as defenders of genocide. Fans are more than upset with this portrayal and have been quick to accuse Tim Burton and Netflix of being racist.

Me trying to badly to push pass the racist and anti-Black undertones in the Wednesday Addams Netflix show. Like whoever thought making the Black man as the owner of a pilgrim amusement park is literally going to HELL. ?????????

“Me reluctantly trying to obviate the racist and anti-black undertones in the Wednesday Addams Netflix series. Whoever thought of making a pilgrim amusement park owner black is literally going to HELL”

“Tim Burton finally casts black actors and turns them into outlandish villains. You can’t tell me that this man isn’t insufferable and racist as hell in real life”

Tim Burton not racist, huh? On Wednesday, the boats in the Poe Cup are named after Edgar Allen Poe stories. The black character Bianca is on the Gold Bug team. The Gold Bug is the only Poe story that features a black character?a particularly dumb slave named Juniper.

“Tim Burton’s not a racist, huh? On ‘Wednesday,’ the Poe Cup ships are named after Edgar Allen Poe stories. The black character Bianca is on the Gold Bug team. The Gold Bug is the only Poe’s tale that features a black character – a particularly foolish slave named Jupiter”

While Tim Burton and the production company most likely didn’t give it a second thought, blundering wildly, it’s clear that they’ve caused widespread disgust at the way black people are portrayed on the show. The rejection of the lack of positive black representation in the career of the acclaimed director has been brewing for a long time, since Burton had implied that portraying non-white characters was not a necessity: “Things are either necessary or they are not”he said, implying that he “politically correct” he did not like it. The newspaper New York Post He asked Tim Burton’s manager, Mike Simpson, for comment on the growing controversy, but Simpson replied: “I’m not going to tell you about such a silly request for comment”.

Tim Burton really thinks weird only comes in white people. I don’t even look at him for diversity.

“Tim Burton really believes that only being weird can be if you’re white. I don’t even expect him to have diversity”

Only blacks if they bad

Since Tim Burton’s career-changing film ‘Edward Scissorhands’, more than thirty years have passed. Nevertheless, It wasn’t until 2016 that the director first cast a black character in a leading role.. The chosen one was Samuel L. Jackson and the film was ‘Miss Peregrine’s Home for Peculiar Children’, currently his second most recent film after ‘Dumbo’. This already caused him great criticism at the time, because (as it seems that it could not be otherwise) he played the antagonist. However, the actor left in defence from the director when asked about it: “I don’t think it’s his fault or his method of storytelling, it’s just how things turned out”to later add that the director “he’s a great guy”.