Transformers 7 Trailer: Rise of the Beasts Takes the Franchise to the 90s 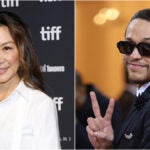 Meet Optimus Primal and the Maximals, your newest Transformers, in the first trailer for “Transformers: Rise of the Beasts” from Paramount Pictures. Watch the embed above.

“Transformers: Rise of the Beasts” will be set in the 1990s between the events of “Bumblebee” and the main film series started by Michael Bay in 2007. It will star “In The Heights” lead Anthony Ramos and “Judas and the Black Messiah” star Dominique Fishback as a pair of archeologists who stumble into an ancient conflict between several factions of Transformers who transform into beasts instead of vehicles, with Optimus Prime and the Autobots soon entering the fray.

Ron Perlman will also star in the film as the voice of Optimus Primal, the leader of the Maximals. The film also stars Pete Davidson as the Transformer Mirage, and Michelle Yeoh as Air Razor. Additional cast includes Peter Dinklage as Scourge), Liza Koshy as Arcee, John DiMaggio as Stratosphere, David Sobolov as Rhinox/Battletrap, Michaela Jaé Rodriguez as Nightbird, Cristo Fernández as Wheeljack, and Tobe Nwigwe as Reek.

The six “Transformers” films have grossed $4.84 billion worldwide since the franchise launched in 2007.

“Rise of the Beasts,” the 7th Installment in the “Transformers” franchise will be released in theaters on June 9, 2023.