They reject the hydraulic project in San Gregorio Atlapulco, Xochimilco 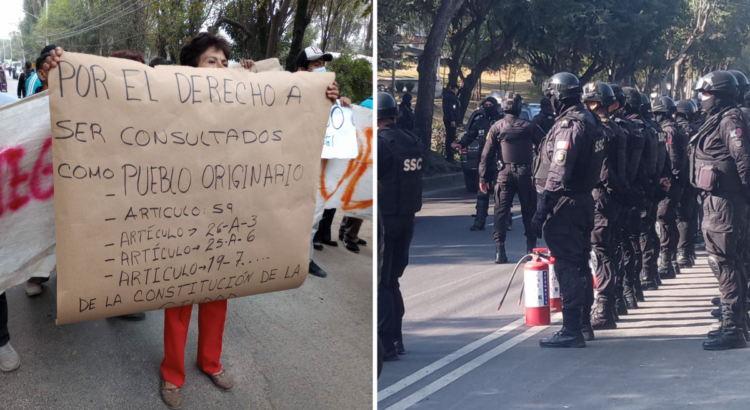 Inhabitants of San Gregorio Atlapulco, in Xochimilco, protested against the hydraulic works of the Actopan collector, about which they denounced overexploitation of water and lack of consultation.

The residents said that uniformed officers went to the site to remove them, for which they accused repression. Through social networks, they shared photos and videos of the elements in the place.

For its part, the Coordination of Peoples of Xochimilco assured that policemen encapsulated the people in the demonstration and affirmed that some were assaulted for the elements.

In turn, the Road Guidance Center of the Secretariat of Citizen Security (SSC) of Mexico City He explained that circulation was closed on Av. México at the height of Nuevo León, Xochimilco mayor’s office.

The inhabitants installed this Thursday a blockade against works of the Mexico City Water System (SACMEX), since they maintain that they have not been previously consulted and the area is being overexploited.

According to the residents, there are irregularities in the works of the Actopan Collector and they point out that, by not consulting them, the rights of native peoples.

In addition, they maintained that the authorities have not provided them with sufficient information on the impacts and benefits of the project, as well as the bidding contracts.

Likewise, they point out that sewage is discharged from Milpa Alta, contaminating the area and detail that with the collector these will increase.

In a statement, they declared that all the works have represented a greater cost than benefit, since they maintain that they are “unsafe, inoperative, inefficient and expensive.”

Finally, they demanded that their right to a healthy environment be respected, to be consulted and to demonstrate, as well as to preserve their territory. Therefore, they rejected the overexploitation of the aquifers, the works, the drainage waters and treatment plants on the site.

Since Thursday night, the protesters registered the police presence in the peaceful mobilization.