Is Lack of Star Power on ‘The Crown’ Season 5 Tanking Demand for the Show? | charts 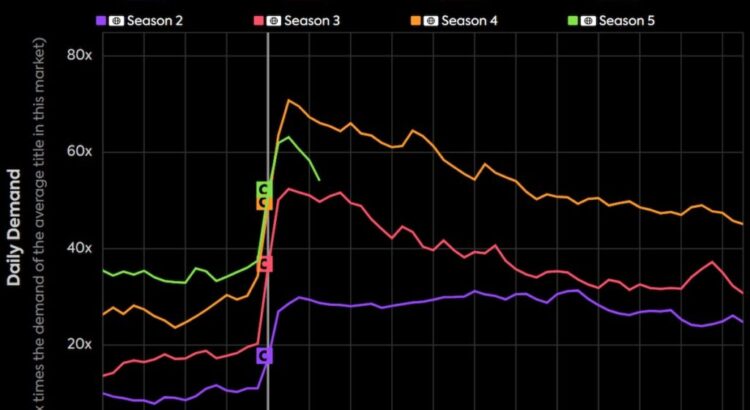 Compare this to January-October 2020, before season 4 premiered on Nov. 15, 2020, when the show averaged 25 times the average series demand around the world.

However, raised attention for the show driven by real world events hasn’t translated to a more successful season 5 premiere, which debuted on Nov. 9, as can be seen below.

Global demand for this season of “The Crown” peaked at 63 times the average series demand on Nov. 11, compared to season 4’s peak at 71 times two days after it premiered. This is remarkable given how demand for the show has consistently grown each season up to this point. It’s difficult to diagnose exactly why audiences are losing interest in the show this season. This may be driven by fatigue with news about the royals after they have dominated headlines for months. It could be people naturally losing interest in the show after a five-season run. Or, it may be driven by another factor.

One possible reason that we are able to quantify is the cast this season. “The Crown” is unique for changing out a majority of the cast every two seasons to portray aging characters as time progresses. In season 3, the actors playing Queen Elizabeth, Prince Philip and Princess Margaret were all replaced with new actors who would reprise their roles in season 4 (Olivia Colman, Tobias Menzies and Helena Bonham Carter, respectively). In the six months before their debut on “The Crown,” these actors had between 3-6 times the average talent demand in the US

The actors stepping into the three roles this season have a much lower level of demand than their predecessors. In the six months before the season 5 premiere, Jonathan Pryce, Lesley Manville and Imelda Staunton all had demand slightly above average talent which is much lower than the amount of attention their counterparts commanded in the lead up to their debut. However esteemed these new actors may be, the fact that they all capture less audience attention means that the show may not be getting the star power boost it received in previous seasons. With a sixth and final season planned, it remains to be seen if “The Crown” can reverse this decline and end on a high note.