‘Improper’ action by the police in Xochimilco, says government 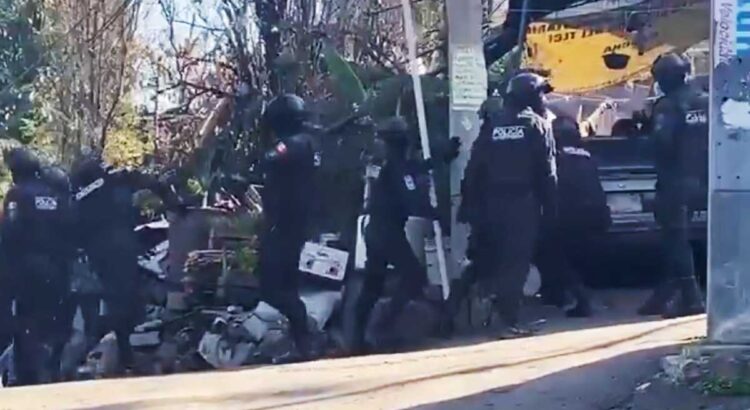 The government of Mexico City acknowledged that the actions of the police in the San Gregorio Atlapulco operation in Xochimilco were “improper”.

Neighbors held a demonstration against the hydraulic works of the Actopan Collector, about which they denounced overexploitation of water and lack of consultation.

In response, the government sent policemen to remove them. Neighbors denounced abuses and repression during the operation.

This Sunday, the government published a statement saying that the head of government, Claudia Sheinbaum, “asked” the City Human Rights Commission to carry out the corresponding investigation.

In a statement, it was stated that the Head of Government “instructed” the Secretary of Citizen Security, Omar García Harfuch and the Secretary of Government, Martí Batres Guadarrama, the dissemination of the “Agreement for police action in the prevention of violence and acts that transgress the exercise of rights while attending demonstrations and meetings in Mexico City”.

It ordered better training for public servants to guarantee compliance with laws, regulations and protocols for the use of public force and protection of human rights.

It was decided to suspend the works in charge of the Water System of Mexico City in San Gregorio Atlapulco and Caltongo.

The government affirms that they are “drainage works to benefit the sanitation of the canals in the area and that they were requested, at the time, by the towns themselves.”

Similarly, the government ordered a detailed explanation of the project, as well as a discussion process with Ejidos and Communities “until it is perfectly clear that there will be nothing that favors the privatization of social property on conservation land.”

The statement from the capital government criticizes the conservatives:

Finally, it is necessary to denounce the opportunistic position of conservatism. Who have never cared about social property or conservation land.

On the contrary, they have made illegal real estate development a private business at the expense of the people.

Today they feign concern when their goal has always been to privatize social property.