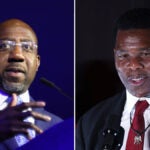 Jimmy Kimmel tapes episodes of “Jimmy Kimmel Live” in the afternoon, so there’s no way he could have known the outcome of the Georgia US Senate runoff election between Democratic candidate Raphael Warnock and Republican Herschel Walker.

But Kimmel clearly saw the signs, because in his monologue, he admitted to being sad, as a standup comic, by “the idea that Herschel Walker won’t be on camera every day.” And so he presented a touching in memoriam video for Walker’s political career that included all the highlights and lowlights of his extremely weird campaign.

If you’re reading this, then you already know how things went: Raphael Warnock won the election by a razor thin 50.7%, securing Democrats a crucial seat and a 51-49 Senate majority. For those who didn’t know this, well now you do. Anyway, back to Kimmel.

In his monologue, Kimmel ran down how the candidates spent the last day of the campaign, starting with an accurate joke referencing Walker’s many lies about his personal life. Kimmel noted that Walker’s patron, Donald Trump, didn’t go to Georgia to campaign for Walker, but noted the ex-president’s social media statements were kind of weird.

Trump, Kimmel related, posted on Truth Social, “Vote today for Herschel, he will never let you down!”

“Unless you’re one of his kids. Then he will very likely let you down,” Kimmel joked.

Kimmel noted how the race could have been affected by Georgia’s weather. He also mentioned how Fox News has been covering the election. Then Kimmel broke down the myriad ways Walker is kind of a bad candidate regardless of whether you agree with him. This included his many secret kids and secret abortions, his history of domestic abuse, his many lies about his past, and of course, the fact he lives in Texas, not Georgia.

See also  Southern charm: every time Shep Rose was at the center of the drama

“But he did play football. That is true,” Kimmel conceded. And that’s when he got his tribute

“And now the voters will decide if he stays or if he goes. And I have to say, as a person who does a show every night, the idea that Herschel Walker won’t be on camera every day, is sad to me,” Kimmel said.

“So, whatever happens tonight, I just want to say, it has been a wild ride. Thank you and whatever the outcome, I thought it would be nice to take one long look back – at one of the most entertaining Senate Campaigns – in the history of this country.”

Then came the video, which noted how weird of a public speaker he is—remember the vampires vs. werewolves thing? And of course, remember his many, many lies of him? It’s all in there and it’s all fun. You can watch the whole monologue above – it starts with the Walker stuff.