Seth Meyers Explains to Herschel Walker That Pronouns Are ‘What You Call Your Illegitimate Kids’: ‘Oh, Them?’ (Video) 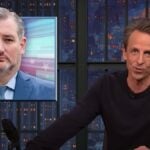 Herschel Walker claimed at a campaign rally this week that he had no idea what pronouns are, so on Tuesday night, Seth Meyers offered an easy memory cue for the Senate candidate.

Speaking in Georgia the day before the runoff election he would go on to lose, Walker ranted about the military, complaining that liberals are “bringing wokeness into our military” by respecting people’s pronouns. “I don’t even know what the heck is a pronoun, I can tell you that,” Walker said. “I’m sick and tired of this pronoun stuff. What I want our military men and women to do is to be at war fighting.”

But, according to Meyers, a crowd member probably could’ve helped Walker out with one sentence.

“Someone said ‘It’s what you call your illegitimate kids’ and he said’ohthem?’” Meyers joked.

Though Walker did end up losing to incumbent Senator Raphael Warnock in the end, it was a nail-biter of a race, with the two men taking turns at being in the lead. When all was said and done, with more than 95% of votes counted, Warnock won with 50.7% of the vote. It’s a razor thin victory that keeps the seat in Democratic hands for the next 6 years, and expanded Democrats’ control of the senate to 51-49.

But, the closeness of the race is something that Meyers suspected was hard for Warnock to reconcile over the last few months.

“It cannot be good for Raphael Warnock’s self esteem that this is a close race,” Meyers said. “I mean, imagine seeing your opponent basically eating paste on TV every night and knowing he might win?” 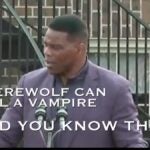