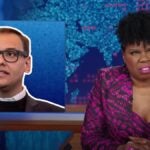 Congressman George Santos may be vehemently denying that he was ever a drag queen in Brazil, but “The Daily Show” guest host Wanda Sykes would support him if he was. In fact, the comedian joked on Tuesday night that she’d rather interact with his drag persona than his real self.

Last week, photos began circulating online that appeared to show Santos dressed in drag at a festival, prior to his days in politics. According to another Brazilian drag queen who reportedly performed with Santos, he appeared onstage under the drag name of Kitara Ravache.

Since the photos have circulated, Santos has vehemently denied that he was a drag queen for more than just one festival, and tweeted that the claims “that I am a drag queen or ‘performed’ as a drag queen” are “categorically false.” On Saturday, when asked by reporters directly, Santos scoffed at the question.

“No I was not a drag queen in Brazil, guys,” he said. “I was young and I had fun at a festival. Sue me for having a life!”

At that, Wanda Sykes was a bit dumbfounded. Sue me for having a life? No man, we should sue you for lying,” she mocked.

That said, the comedian admitted that the possibility of Santos being a drag queen is “pretty cool,” and that she wouldn’t mind spending more time with his alter ego.

“I like Kitara!” she said. “Kitara, you stay. George Santos? Sashay away.”

You can watch the full segment from “The Daily Show” in the video above. 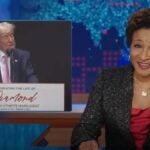 See also  When will the Jurassic World: Dominion trailer be released?