Once Upon A Time: 10 Episodes To Watch If You Miss Captain Swan 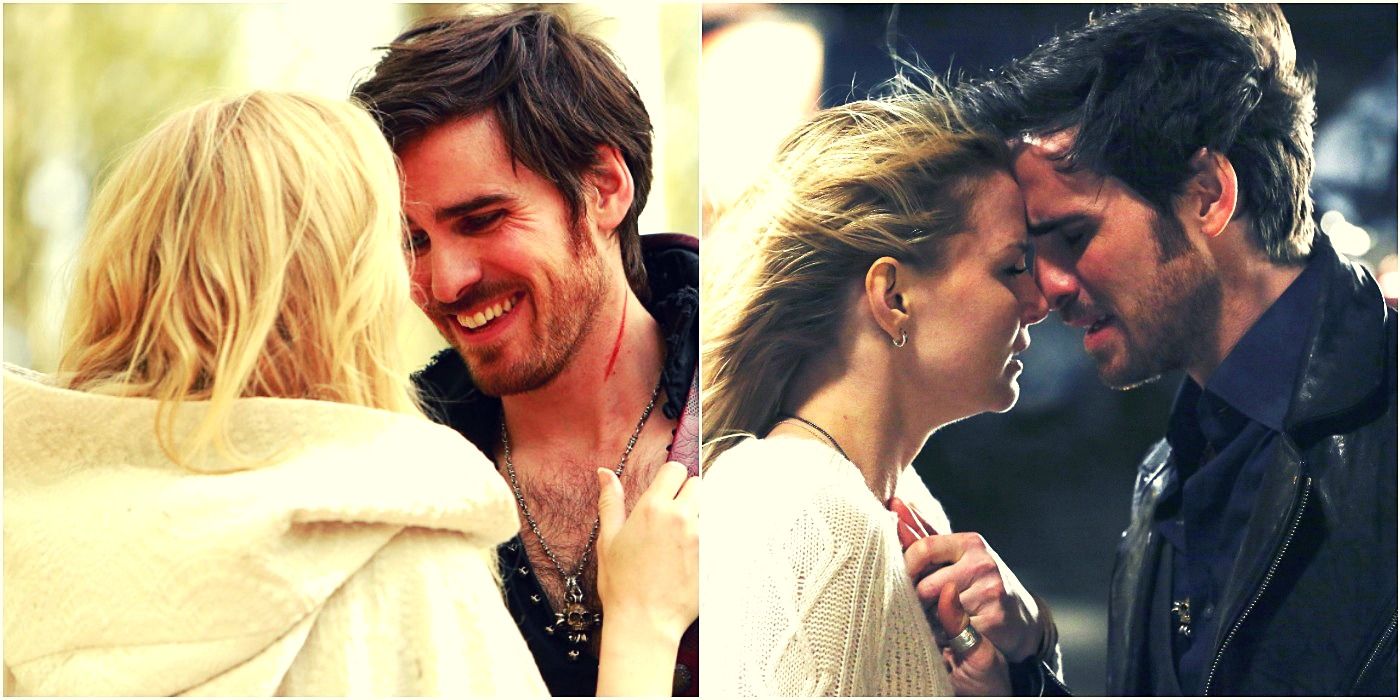 ABC’s epic fantasy drama Once Upon a time took audiences to Storybrooke, a place where the modern world and fairy tales collide. Cursed by the Evil Queen with false memories, the magical residents live in an eternal bubble with no awareness of their true identities. Everything changes with the arrival of Emma Swan, the lost daughter of Snow White and Prince Charming.

The concept of True Love is a predominant theme of the series, and Emma found it with none other than Captain Hook. Elegant and mischievously handsome, it was clear from their first episode together that their relationship was going to be something special. Although the show ended in 2018, fans feeling nostalgic can relive some of its sweetest, hottest, and most romantic moments through some of its best episodes on DisneyPlus.

It’s no mistake that the episode immediately after Emma and Hook meet, also reveals many of their ingrained insecurities when it comes to love. Tasked with stealing a magic compass from a giant, Emma is generally unimpressed with Hook’s flirtation and his attempts to get to know her throughout their journey.

Clever and suspicious when it comes to the stranger with hooked hands, even Emma’s facade flinches when the handsome pirate bandages the cut on his hand and ties it with his teeth, while maintaining an absolutely sinful amount of eye contact.

Hook wakes up in Storybrooke Hospital after being hit by a car, and Dr. Whale tends to his injuries. Meanwhile, Emma has some questions. This is an excellent episode for Hook and Emma’s interactions.

Hook isn’t being completely cruel or villainous, but it’s still early enough in the series that he’s not yet a puppy in love. He’s all an arrogant braggart and overconfident sexual innuendo, including one that induces rolling eyes over his “attachments” that Emma might prefer to her hook.

Poisoned with Dreamshade, David’s time is running out and Hook sets out on a risky journey through the jungle to help save his life. A Hook-centric episode that focuses on his past in the Royal Navy and his tragic relationship with his older brother, viewers see humanity in the damaged pirate more than ever.

RELATED: Which Once Upon A Time Character Is Your Soulmate, Based On Your Zodiac?

It also highlights the incipient closeness between Hook and Emma, ​​which culminated in their first kiss. Although Emma has tried to deny the attraction, the tension becomes excessive. Grateful and relieved, Emma initiates a passionate kiss that would become the first of many.

Emma, ​​Neal, and Hook team up to go on a mission to find Dark Hollow and Pan’s shadow, but tensions rise between the two men vying for Emma’s affection.

Emma and Hook danced around their sizzling chemistry for weeks, but since their fiery kiss, Hook is no longer interested in that dance, especially not with her ex-boyfriend in the picture. “When I win your heart Emma, ​​and I will. It won’t be because of any deception. It will be because you love me.” Romantic and serious, Hook makes his true feelings clear once and for all.

Drawn back in time by Zelena’s curse, Hook and Emma set out on the adventure of a lifetime to find their way back home, but not before meeting a familiar face along the way. To the chagrin of Hook, who needs a distraction, Emma playfully seduces a younger version of the brooding pirate captain.

RELATED: Once Upon A Time: 5 Times Captain Hook Was A Hero (& 5 Times He Was A Villain)

Travel back in time, fairy tale costumes and two Captain Hooks. The second part of the third season finale has a bit of everything for Captain Swan lovers.

They’ve scaled bean stalks, stolen from giants, walked Neverland, and shared a passionate kiss, but it’s not until season four that Killian and Emma finally go on their first real date. It’s adorable to see some of the stress melt away when the two lovebirds dress up for a romantic dinner, even if it doesn’t go exactly as planned.

Fighting insecurities and wanting to be whole for Emma, ​​Killian makes a deal with Mr. Gold to get his hand back with disastrous consequences. After all, magic has a price.

Like the season 3 finale, “Operation Mongoose Pt. 2” is a roller coaster of emotions. Trapped in an alternate universe where her characters have been rewritten, Emma meets a shy, blushing Killian Jones who is bullied by a cruel captain, and Snow White is a ruthless queen.

Desperate to fix their stories and return home, the characters must work together to survive. Once home in Storybrooke, Emma finally admits her love for Hook, but her moment is bittersweet as she takes the dagger and turns into the dark one.

Trapped in the underworld by Hades, Hook and Emma must set out on a journey to its depths to perform a test of true love that will supposedly give Hook his freedom.

RELATED: Once Upon A Time: 5 Times Emma Was The Hero Of The Story (And 5 Times She Was Someone else)

Another episode that delves into Emma’s difficult past while emphasizing the strength of her bond with Hook in the present, “Firebird” may have a seemingly tragic ending, but it is a beautiful episode that shows not only that they are a team, but that their love. because for each other it is selfless and true.

Hook struggles to find his way back to Emma, ​​while Regina is unsure how to break the treacherous sleep curse that has gripped Charming and Snow.

Although Hook and Emma spend most of the episode apart, it is worth it for the moment when they finally meet again, and Hook kneels down to ask that long-awaited question. “So, Emma Swan … Do you want to marry me?” His answer is, of course, a tearful “yes”.

One well-intentioned wish makes an entire kingdom explode into song, and Storybrooke has a wedding to plan! “The Song In Your Heart” is special in many ways. It’s the final episode for many of the main cast members, including series regulars Jennifer Morrison, Ginnifer Goodwin, and Josh Dallas.

This spectacular musical is also the episode where Hook and Emma finally get married. Their true love has been proven over and over again, but in season six, they can finally start their own Happily Ever After.

NEXT: 10 Actors You Completely Forgot Appeared In Once Upon A Time

Passionate about writing and the entertainment industry, Alex currently works as a freelance writer for ScreenRant, GameRant, and TheThings. He is also a screenwriter and has degrees in Film Production and Fine Arts. Twitter: itsjustalex13