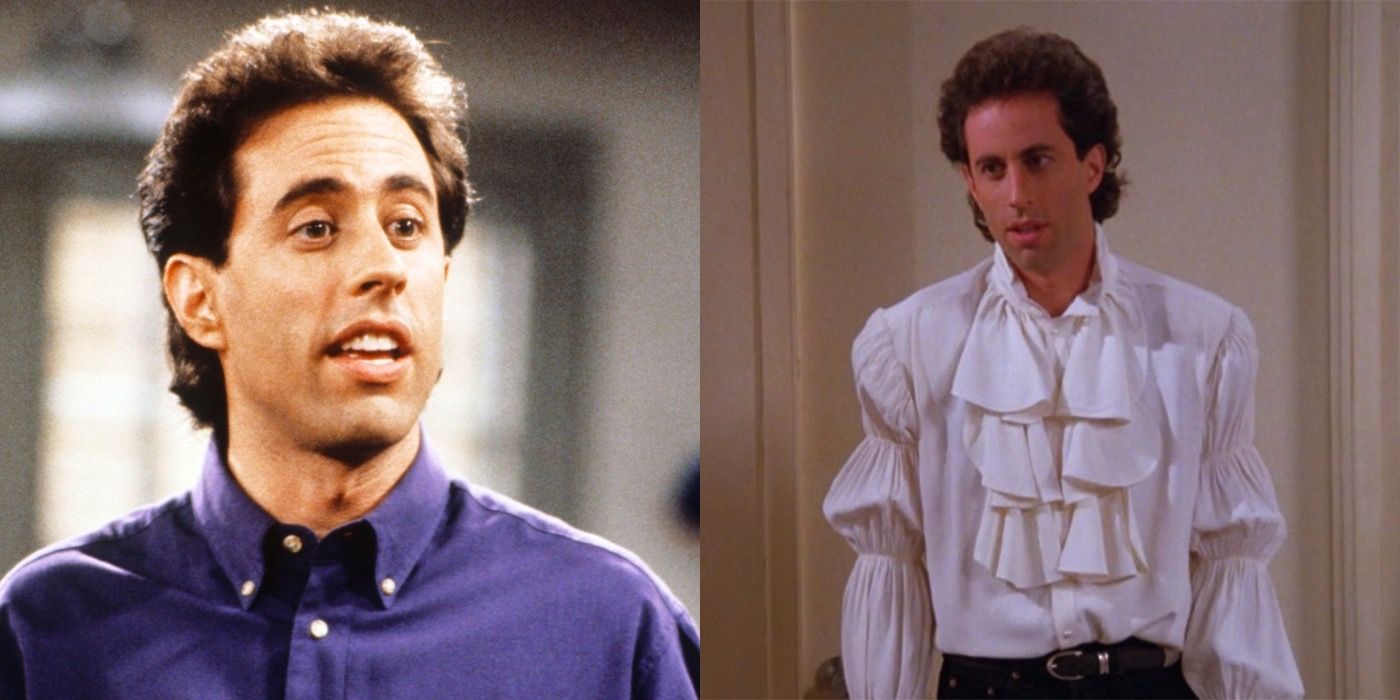 Jerry Seinfeld’s lead role in the hit sitcom Seinfeld has proven to be one of the most memorable characters in television history. The show’s format, which is described as “about nothing,” allows for a litany of random observations and judgments about anything and everything in everyday life.

RELATED: Seinfeld: 10 Things About Kramer That Would Never Fly Today

Being surrounded by a cast of quirky but slightly undesirable characters while he’s a comedian himself gives Jerry plenty of ammo for comedic moments. Also, his fickle personality is antagonistic enough to put him in a lot of bad situations. Throughout the show’s nine seasons, Jerry proved to be a cultural touchstone who always manages to say what fans wish they could.

10 “Why do I always have the feeling that everyone is doing better than me?”

As he wanders through a shopping mall parking lot with the gang trying to find Kramer’s car, it’s understandable how this thought could have passed through Jerry’s head. With Elaine worrying about her new goldfish dying before she got home and Jerry needing to go to the bathroom, chances are most people were doing better than him that Saturday.

Finally, Jerry decides to relieve himself only to have a security guard see him and take him to his office. Once outside, and they finally find the car, they realize that Kramer’s car won’t start.

9 “She is one of those people who speak little.”

In the lexicon of Seinfeld-isms, the “low talker,” is one of the most memorable. In a situation where all the fans have found themselves at one point or another, Jerry and Elaine find themselves having dinner with Kramer’s new clothing designer girlfriend, who can’t say anything in an appropriate volume.

RELATED: Seinfeld: 10 Fake Movies That Really Should Be Made

Trying to be polite, Jerry nods in agreement with everything she says, only to be forced to wear one of his ridiculous puffy shirts on a late night talk show. While most viewers won’t find themselves on television in an ugly shirt as a result of someone’s low volume of conversation, it is the perfect example of Jerry’s ability to describe minutiae in memorable ways.

8 “People should not be allowed to go out in public.”

While complaining about the single life with Elaine, Jerry comes to this conclusion because he finds dating “too embarrassing” to do in public, and Elaine wonders if it would be easier to marry. However, their ideas are going nowhere, as the two continue to date random people for the rest of the show.

There’s no question that many single fans of the show have cited this at least a couple of times, with the dangers of dating being one of the most identifiable issues Jerry tackles throughout the show.

7 “What is this obsession that people have with books?”

Here, Jerry reflects on people’s obsession with hoarding books. After George finds himself in the dilemma of whether or not he should retrieve his books from an ex-girlfriend’s apartment, Jerry rants about the absurdity of going to get those books in the first place.

Explain that there is no point in saving books that have already been read, especially when there is no intention of reading them again. George ignores this point. Later, once the books are back in George’s possession, Jerry asks him whether or not he has read them since he got them back, to which he replies “no.”

6 “I can’t go to a bad movie alone. What am I going to do? Make comments to strangers?”

In the famous episode where Jerry and the gang get stuck waiting in a Chinese restaurant for an hour, Jerry’s main concern is getting to the movie on time. While George and Elaine finally get tired and want to give up on the movie plan, Jerry insists because he doesn’t want to go see Plan 9 from outer space single.

This is the kind of situation most fans would find themselves in, and it’s a completely understandable urge that you only want to watch a bad movie to make sarcastic comments with friends. Once again, Jerry proves to be apt at describing something that everyone can relate to.

5 “I’m miserable, so I might as well be comfortable.”

RELATED: Seinfeld: 10 Hilarious Reasons Jerry broke up with his girlfriends

While it’s probably not what goes through the minds of people who wear sweatpants, at least not consciously, it’s this gloomy sense of the world that makes Jerry’s sense of humor so memorable.

4 “Did you know that the original title of War and Peace was war? What is it for?”

During a conversation, Jerry decides to tell Elaine a false fact about the original name of War and peace, illustrating another way this group of friends might not be the best people. While it is clearly a joke, Elaine decides to tell this anecdote to her boss and to a famous Russian author they are working with, causing an uproar that leads to her organizer being thrown out of the car window.

RELATED: Seinfeld: 10 Most Iconic Foods On The Show

This leads to Elaine being blackmailed by the woman the organizer, whom she desperately needs, beat until she pays the damages. While it’s not entirely his fault, it’s hard to ignore that none of this would have happened if Jerry hadn’t lied to Elaine.

3 “Are you the master of your domain?”

Due to the television sensors of the time, the writers had to come up with clever hints for when the characters talk about the contest. The most famous comes when Jerry asks George if he is the “owner of his domain”, to which George answers yes. In the end, it is never revealed who won, and the last two were George and Jerry.

two “Sex doesn’t make sense. I can understand that. But dinner, that’s heavy. That’s about an hour.”

An example of a date that might have become more relatable over time, this Jerry philosophy seems more at home now than it did in the ’90s. Jerry, a busy comedian, values ​​his time above all else, and while sex may seem A bigger problem than dinner for some, it’s not a big deal to him as long as it doesn’t last an hour.

On this date, Jerry explains to Elaine how to know when he’s back with his ex, the bets they’re betting on, and explains that when they go to dinner, they officially come back.

1 “Last night I had a dream that a hamburger was eating me.”

In one of Jerry’s most surreal moments, after George finishes explaining his dream in which his new intern fulfills goals in life that he never could, Jerry explains his own dream in which food is eating him.

This dream is more unique and is not explained further throughout the rest of the episode, but it is certainly remarkable. Not one of the most quoted moments on the show, the idea of ​​having a strange and inexplicable dream is one that most viewers can relate to.


Next
Hannibal: 5 Ways The Show Was Perfect (And 5 Ways It Could Have Been Improved)